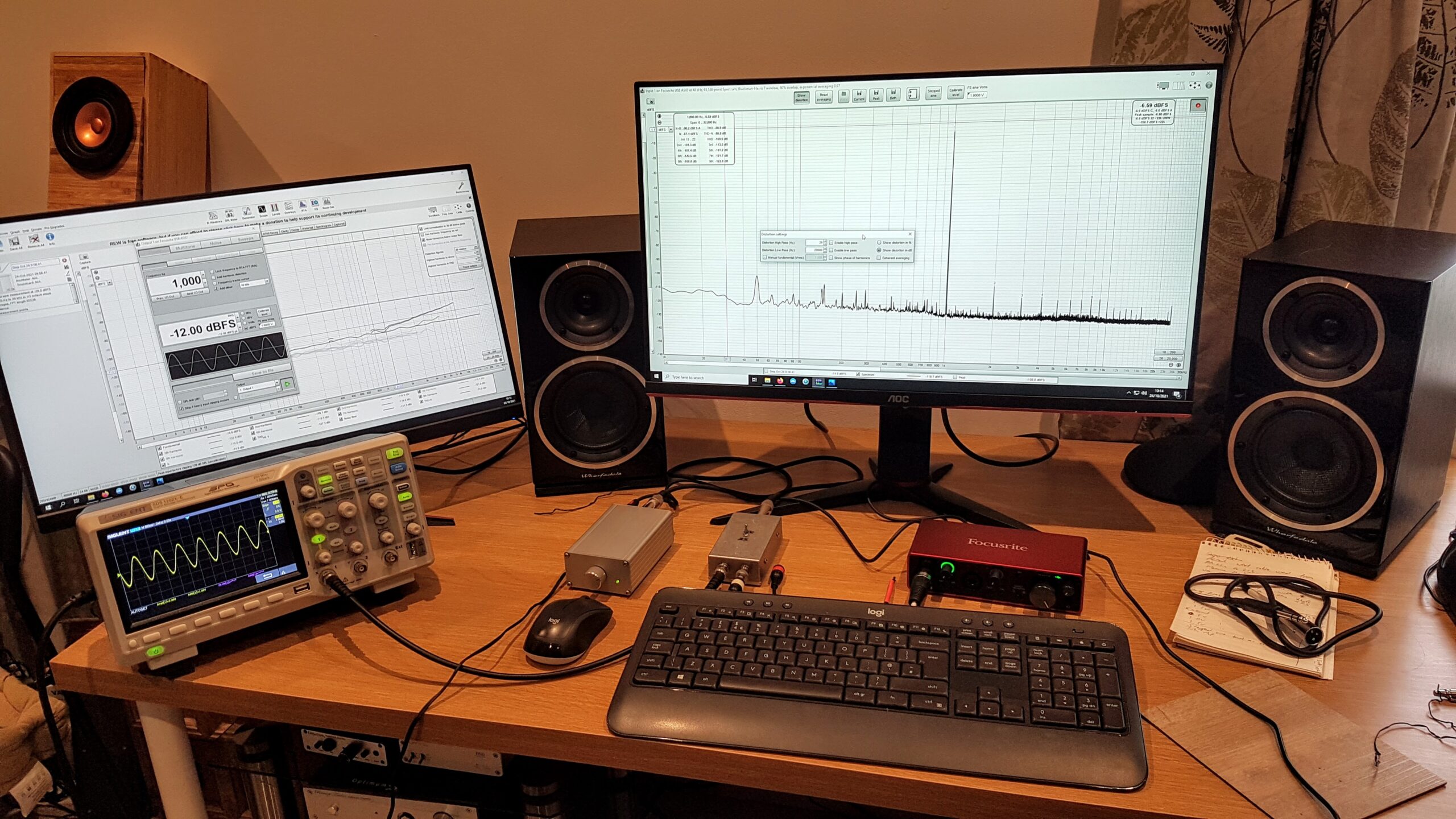 Following on from my last post, looking at integrating my existing equipment presented a small headache. I already have a headphones dummy load which, whilst not providing the exact impedance of my current headphones, does the job. The problem is that the outputs from the dummy load are BNC sockets, as it was originally designed to go into my scope. The Focusrite Scarlett 2i2 inputs accept XLR or 6.3mm phono plugs. I thought about fitting more sockets in the case – but there’s not much room, or swapping the BNC for XLR – but I still need the BNC for scope purposes. I even thought of building a new dummy load. I may still go down that route at some point, inspired by a rather nice new load at slowdiyer, which makes mine look somewhat agricultural! I eventually ordered some RCA-BNC adaptors and XLR to RCA patch leads to connect the dummy load to the 2i2. I found that the XLR input, designed for microphones, did a better job at rejecting AC noise. The downside is that its preamp pushes the 2i2 into clipping quite early and so an RCA to 6.35mm TRS cable can be used with a slight noise penalty or an attenuator, such as I built previously.

I spent a few days playing around with the equipment and a headphone amplifier, trying to get to grips with the software, hardware (desktop PC, laptop, 2i2, dummy load, Akitika) and interconnects. In all honesty, cabling appears to be a matter of trial and error to get the best results, at least for me. Some of the reported combinations may not work for you and it is probably worthwhile having a stock of cables and connectors to try for yourself. I found that results were repeatedly better from my desktop than my unplugged laptop, contrary to many people’s experience. There are reports of a ‘sweet spot’ on the 2i2 with respect to low distortion but this is so variable that again, your own trial and error will be better than just replicating somebody else’s setup. I think what is probably more important is transparency in the testing with all variables (that I can think of) reported so that anybody could verify the results. Similarly, there appears to be no consensus on whether the use of an external signal source will significantly affect the results, at least for your combination of hardware. I have experimented with both the internal generator of the 2i2 and the external Akitika oscillator and I think cabling and choice of input has some bearing here as well.

After that lengthy preamble, below is a series of measurements of my most recent amp, the SlowMoy. As this is in a cannibalised enclosure and sitting at my desk, I thought it would be fitting to test this first. To begin, I set the interface preferences to ASIO 48kHz. Gain level is at minimum on the 2i2.

An initial consideration is to decide at what voltage level the amplifier should be tested. When quoting distortion measurements, different manufacturers choose different levels. Schiit quote THD+N at 1V RMS into 32 ohms for their Magni+, whilst JDS Labs use 2V RMS for the Atom. Over in the thread at DIYAudio, a variety of voltages are used, with some using 1V Peak to Peak rather than RMS (easily converted). Archimago uses a variety of voltages in this test, partly as he differentiates between a ‘synthetic’ load (i.e. a dummy load resistor) and the actual headphones. I decided on 0.5-2.0V RMS in 0.5V steps, stopping at 1.5V into the 25Ω load due to the onset of clipping.

The setup for testing and the connections is thus:
Focusrite Scarlett 2i2 internal generator>0.5m RCA patch cable> SlowMoy amp with 24V SMPS external PS>1m TRS cable>Dummy load>0.5m RCA to XLR> 2i2. I also temporarily connect one of the outputs on the dummy load to a Siglent SDS 1202X-E oscilloscope to check output voltage from the the amplifier at the load.

Below are the results of the 1kHz sine wave signal into the 25Ω load. There is some AC noise present but I think these are pretty impressive. The harmonic signature is 2nd order dominant with THD+N around the -90dB mark. (Note: REW can display distortion results as dBFS or percentages. Here the graphs display percentages as this appears to be most common. A calculator can be used to convert to dB if required).

And here are the results into the 330Ω load, again, very good results.

The image below shows the results from a stepped sine measurement. The coloured elements in the harmonic lines denote when they rise above the noise floor. The designer of REW recommends using a stepped sine rather than a frequency sweep when testing equipment.

Whilst these measurements are very basic, restricted by the quality of the interface, connects and other environmental factors, (and my own shortcomings) they can at least tell you if your DIY amplifier is behaving and provide some reassurance, if like me your hearing is compromised but you would still like to build something that should be relatively close to providing fidelity to a source. It’s also fun, you get to play with some nice stuff and fall down a rabbit-hole of information!