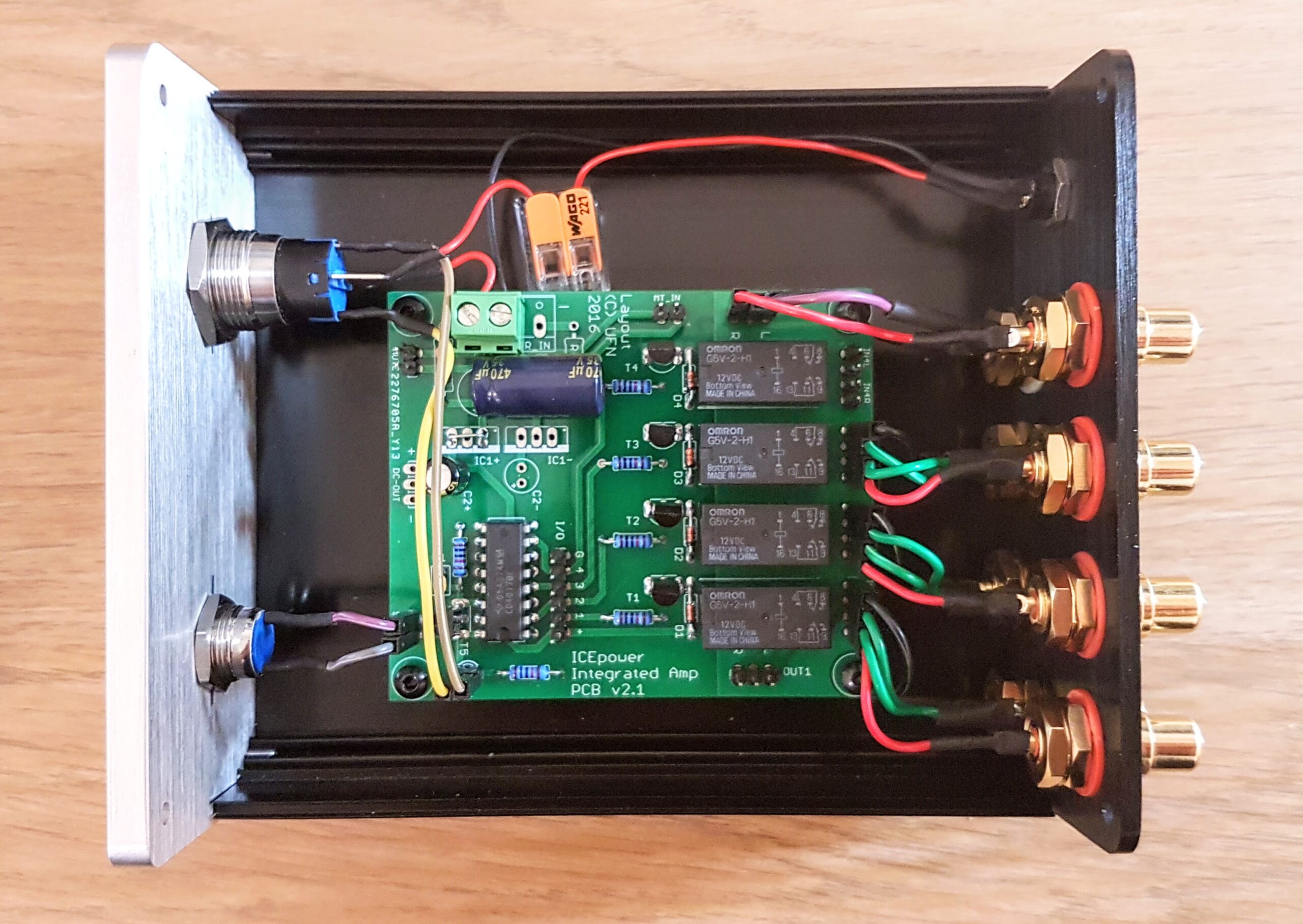 A convoluted setup in one of my rooms needed a little more confusion adding to it. As mentioned in my last post, I have a couple of sources – a PC and my streamer, which connect to a preamplifier, two amplifiers, two DACs and a headphones amp. I know I could streamline this, but I like swapping my builds around for different use cases. In that post I showed how I had set the two amplifiers to output to one set of speakers. I also mused at the end that it would be good to sort out the input to my HPA for gaming use, as the PC output is rather noisy to say the least. Whilst I was considering this, I decided to go down the route of using just the one DAC to feed all of my equipment in this rack.

At first, I was going to just make a variant of the amplifier switch box, again a passive affair with straightforward internal wiring from the input and output RCA sockets via a rotary selector switch. Whilst this will do the job, it’s also a bit boring as a project, especially as I’ve just built essentially the same thing with my amp switchbox. I started looking at relay switching circuits, inevitably ending up at Rod Elliot’s ESP site where he does indeed have some projects (Project 163). Uffe over at Slowdiyer also has some modules for selectors (part 1 and part 2) and looking at these reminded me of the selector board PCB he designed for transforming the ICEpower 50ASX2 into an integrated amp. I had already used this in a build and it worked well. I decided to see if it could be adapted for this project as it was designed to be run from the 50ASX2 Aux power supply. Turns out that it can, so I’ve called this the SlowSwitcher (although it actually switches quite fast, but you get the idea!).

The board has some extra components specifically related to the ICEpower Aux power supply from the amplifier. As this is unregulated, the PCB shown here includes provision for a current limiting resistor, capacitors and 12V voltage regulators as recommended in the design manual of the amp (detailed in fig.9, p.7). As I already had a suitable 12V external power supply, I could do away with the regulation and resistor. These need to be jumpered, I used a 0R resistor here solely for aesthetic purposes, but you can just use wire jumpers as I also had to for fit purposes . Uffe recommends keeping the capacitors.

As I was looking for parts, it appears that it is not only ICs that are in short supply. I was looking for Omron G5V 2 H1 12V relays and not one of the the usual distributors had stock until later in the year. Luckily, smaller sellers still have genuine items in limited stock without the gross markup associated with many other products. Switching is by a 4017 decade counter IC, (omit if you want to use a rotary selector instead). The rest of the parts are standard fare, a few resistors, diodes and transistors, a 12V momentary switch for source selection and 12V illuminated latching power switch, both sourced cheaply from Ebay. The board has provision for a power indicator LED and this can be used to connect to the power button LED contacts. For the rear panel I like to use Rean NYS367 RCA sockets, I find these to be good quality at a reasonable price. I deliberately used a white rather than black jack to remind me which was the input! The case is a 1205 size from a seller on AliExpress which cost £15 inc P&P. I only had space to utilise three out of the four outputs, but that is all I need, so it’s no big deal.

Uffe has a nice selector indication panel (board again available from part 2 links above) which connects to the row of 6 pins labelled I/O on the PCB. I really intended to use it this time, but again didn’t in the end. I don’t think my hand drilling is up to scratch and I would ruin the look of the front panel if the holes didn’t line up correctly.

I tested this with my Topping D30 DAC feeding my ICEpower amp, PeeCeeBee preamp into ACA and the O2 headphone amp and it worked perfectly. Although I have this configured as a 1 into 3, you can configure it to have 3 inputs to one output.

Of course, I’ve made my whole setup much more complicated, having to remember to cycle through both amps and speakers now, but I’m pleased with it and enjoyed making it, and sometimes that’s all that matters.