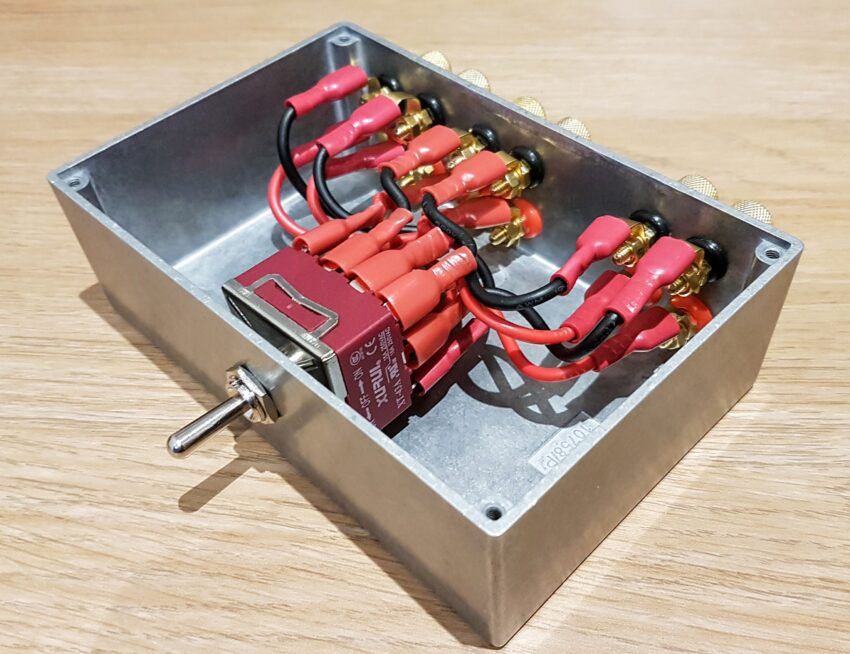 A very simple project this time and actually one that addresses a problem I needed a solution for, rather than yet another headphone amplifier…although those are in the pipeline!

In one of my rooms I have a range of (mostly) DIY audio equipment. Connected by USB to my desktop PC I have a Topping D30 which feeds my IcePower 50ASX2SE integrated amp. This is mainly used for gaming and occasional music playback, but the fan noise of the PC is too intrusive for dedicated listening. For that scenario, I have my DAC streamer, PeeCeeBee preamplifier and one of my power amps, currently the ACA resides here. I only have room for one pair of speakers on this desktop, so rather than keep swapping the cables over, I wanted to have some form of device so that the outputs of the two amplifiers can be safely switched to connect to the single set of speakers. Some people have used a speaker selector switch in reverse, but on many of the cheap examples from the likes of Amazon it can be difficult to tell if there is a common ground, something to be avoided as the article I used for this project explains. For variations on the theme of this box for different usage scenarios, please check the preceeding link as many examples are provided in the comments. You can of course use this switching box to feed multiple sets of speakers from one amp.

The cost of the build was minimal for me, a pack of 16 speaker binding posts were bought from Ebay for £8 inc P&P (only 12 required for this). A couple of these weren’t quite cleanly machined and wouldn’t accept the banana plugs but a quick go over with a file sorted this. A 4PDT on-off-on toggle switch rated for 15A with 6.3mm quick connect terminals was similarly an Ebay sourced item for £6 inc P&P. A Break-Before-Make switch is essential if you intend to have both amps switched on as this should protect your amps (at least non-tube amps, apparently many tube amps prefer a load). Be aware of the amperage rating of your switch too, this should be adequate for your needs. Wiring up is a straightforward affair. The switch has three rows of four terminals. Use the central row for the amplifier and the top and bottom rows for the speakers (or vice versa if you want one amp and two pairs of speakers).

As much as I would like to have a nice case for this, as explained in a previous post, I am still mindful of expenditure and so I am aiming to try and use what I have available. To that end I used a die-cast enclosure from a job lot I picked up when Maplins closed down (cost was about £2 or so). The remaining items were similarly already in my possession and consist of cable (obviously, like all hobbyists I have metric tonnes of this stuffed in every available drawer,) banana plugs and the spade connectors to mate with the switch terminals. So, overall extra cost above and beyond what I had in stock came to £14, perfectly acceptable to make something that I actually had a real need for. In time I may purchase a better case as this one spoils the look of the other components, but it’s not a priority at the moment.

I use a headphone amplifier (again, on rotation) connected directly to the audio out of the PC for nightime use, an unsatisfactory solution to be honest as there is often noise from this output. I’d prefer it to be fed by a DAC using the PC USB output. One solution would be to add a HPA to an existing amp, but space considerations inside the existing amps that can fit in my rack makes this difficult. The next best thing is a separate switcher, much like the amp switch box, but using RCA jacks and a simple rotary selector switch. There are some cheap and cheerful models available but I’m not too keen on most of the ones I’ve seen; at the cheaper end of the scale most of these are plastic and look a bit rubbish. I’ll probably make this the next job as, again, it’s something I actually could do with.