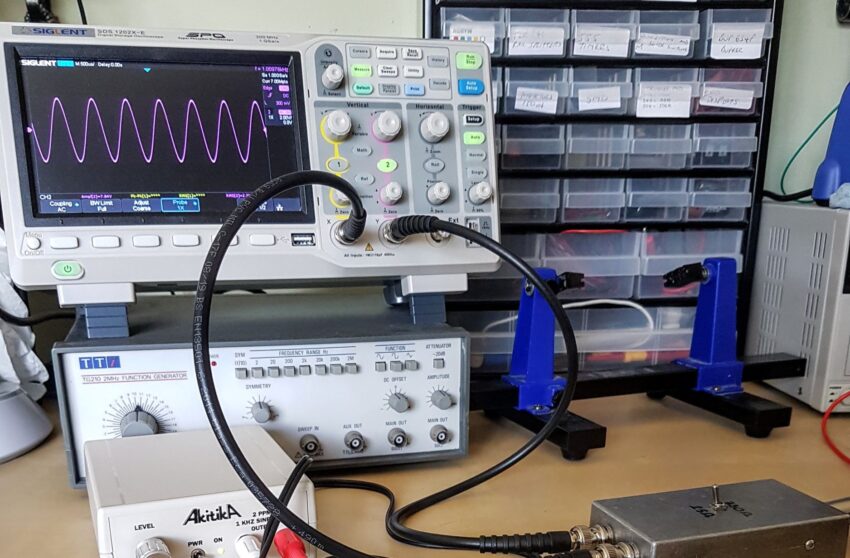 Following on from my last post where I showed the headphones dummy load, I thought I would post the measurements I obtained from the other headphone amplifiers I have built. It’s also an excuse to play around with my new toys.

I knew that eventually I would end up with an oscilloscope, I spent a long time reading about suitable models, so many considerations! I was aware though that it’s easy to get sucked down a rabbit hole and end up buying something that is unnecessary for my light hobby usage. In the end, after much trawling through blogs, forums and the like, I narrowed it down to two of the most popular offerings for my price range, a Rigol DS1054 and the Siglent SDS1202X-E. The decision ultimately came down to price as I managed to get a good deal on the Siglent, £324 including shipping, from a UK based company. I also found an old Thurlby Thandar Instruments TG210 function generator on Ebay for £10 and used this in place of my Akitika.

Setup:
I used the scope to set up the function generator to output a 1kHz sine wave and set the amplitude to 2V RMS (actually 1.99V) as can be seen in the image below. This was later adjusted as necessary to drive the amplifier into clipping. The function generator is then plugged into the headphone amplifier inputs. A headphone cable exits the amp into the dummy load which simulates two headphone impedance loads, 25Ω and 330Ω, to closely match my Sennheiser HD569 and HD600/650. The scope is attached to the dummy load.

The procedure is the same as last time; raise the volume until the amplifier begins to clip and then back off until a pure sine wave is achieved and check the Voltage RMS. To calculate the power, use W = V2 / R

This section will be continually updated with measurements as I build new amps. The table below compares the power outputs into 25 and 330 ohm loads. Following this are the fuller measurements and scope images.

CMoy
Details of this build can be found here. This is powered by a good quality 24V 300mA wallwart.

Objective 2
Details of this build can be found here.

Emmeline XP-7 Clone
Details of this build can be found here.

RJM Audio Sapphire 4
Details of this build can be found here.

Slowdiyer OpaBuf
Details of this build can be found here.

Rod Elliot ESP P113
Details of this build can be found here.