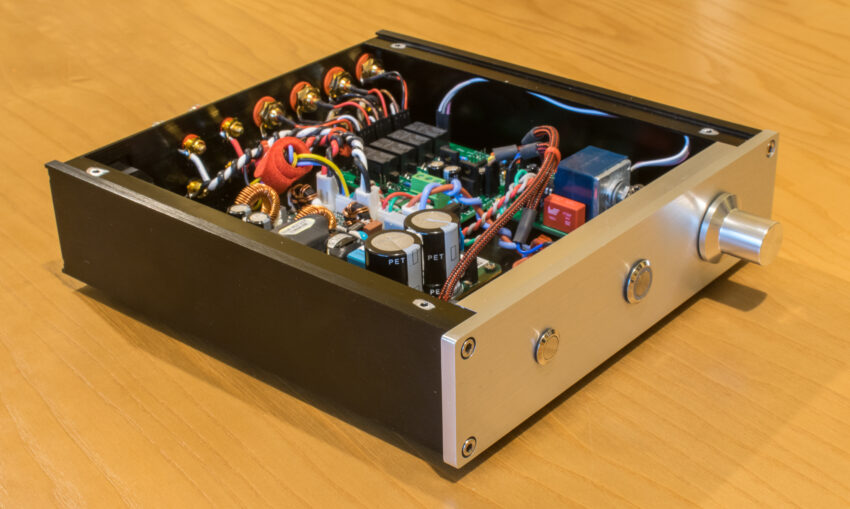 I bought an ICEpower 50ASX2 amplifier from Ebay in 2018. It was an impulse buy if I’m honest as it was very cheap, they retail at about £100 in the UK and I got it for £35, but it’s been sat in my drawer since then waiting for a purpose. I must admit, I’m running out of places to put the builds I make! The time to do something with it finally arrived when a TV appeared in the bedroom and of course this calls for an amplifier. I was just going to put it into an enclosure and leave it at that but, as usual, slowdiyer’s website has some boards which can extend the functionality of the amp. The first is a circuit that provides switching inputs and the second is a preamplifier, the end result being a full integrated amplifier. Of course, this isn’t necessary, but it’s more fun to make this rather than just boxing up the amp module.

The 50ASX2 is an integrated power supply and Class D amplifier module with 25W per channel into 8ohms, more than enough for my intended use. The datasheet provides lots of useful information and advice and the wiring diagram in the designers manual is particularly helpful with regard to optimal wiring layout.

Once I’d put this together and started wiring up, there was a problem with the AUX power supply. The negative supply was OK, but there was no positive. Looking on the datasheet shows two 400ma slow blow fuses at the AUX terminal and a quick check with the multimeter showed that one of the fuses had blown (marked F100 in the picture below and showing the black replacement next to the original brown fuse). I’d checked the board was working when I bought it but never thought to check the AUX supply. I wonder if this was the reason for the cheap sale? A quick check on RS showed these were simple and cheap to obtain, so I ordered some, and on replacing the fuse, both voltages were present, a nice £0.16 fix!

The integrated amp board uses 12V relays and a 4017 IC to provide switching for four inputs from a single push button switch. There is an I/O header, next to the 4017 IC which connects to a little board that can take LEDs for signalling which input is selected. This tiny board is available at slowdiyer but I didn’t use it on my build as I was worried I would mess up my front panel by not drilling the four small holes precisely enough. Regulation for the power from the auxiliary supply of the amp module is taken care of by LM7812/7912. A feed from this board then provides a dual polarity supply for the preamp.

The preamplifier is a simple CMoy based circuit with large, 1uF polypropylene input capacitors (the rationale for which can be found here) and provision for a board mounted Alps RK27 logarithmic potentiometer. The recommended op amp is the LME49720 (still in production, about £2.80 from RS and a little cheaper from mouser) or you could use the LM4562 which is about half the price and available from Mouser. There is a convincing thread on DIYAudio with statements from people working at Texas Instruments that this is a rebadged LME49720.

The T-2205 enclosure was sourced from the eBay seller I’ve used for the last few builds. This particular case has only the IEC socket pre-cut, so out came the trusty drill for the 12 holes for the RCA and speaker connectors. I used a 16mm power switch with integral LED on the front panel, which I connected to the LED provision on the preamp, and a 12mm momentary switch for source selection. I’ve struggled a bit in the past with drilling the larger holes in panels, even when I’ve started with a 3mm pilot hole and gradually increased the drill size. For this build I tried a step drill bit and this was significantly neater and quicker.

The shaft on the Alps pot is quite short and doesn’t protrude far enough through the front panel, so I attached a collar and a small length of bar to extend it. The volume knob was a nice find, I think I paid £3.50 including shipping.

As usual, I removed the anodizing at all the screw and bolt points to ensure conductivity throughout the chassis for the safety earth connection (see fig.3 on the ESP site). Rather than faffing about with JST connectors to connect to the amp, I bought a harness from Ghent Audio which uses decent quality cables, and of course the JST terminals are properly terminated. The wiring layout does deviate from the optimum, but connecting to the integrated circuit and the preamp whilst trying to fit it all into the small enclosure meant compromising a little. However, everything worked on the first attempt and sounds good. This is a really nice project and I’m quite pleased with how it’s turned out, to the point where it seems too good to be relegated to the bedroom!

Thanks to SlowDiyer for making the boards available. The PCBs were manufactured by JLCPCB (I have no relationship with them, I just like to highlight good products and services).