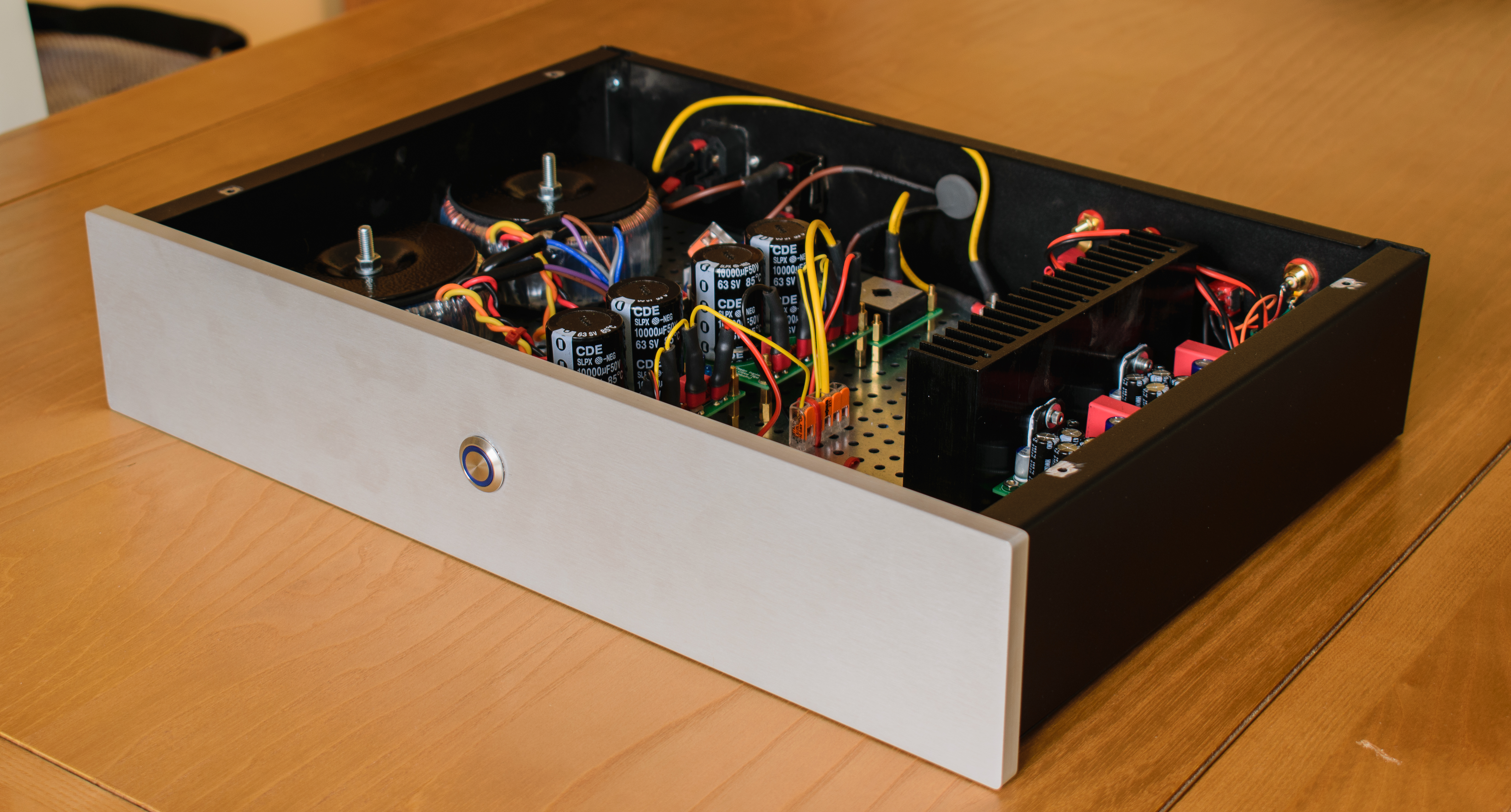 I decided to build an amplifier for a friend. There are a number of good chips for amplifiers and I managed to purchase a pair of LM3886 opamps new for £5 from a seller on DIYAudio a few months ago. With the chip decided upon, a suitable layout was sought. As much as I would like to have a go at the Neurochrome LM3886DR, the cost of the boards is too much for this project. I did consider the CircuitBasics boards but the physical size of the PCBs pushed the cost up quite a bit. Luckily, in terms of timing, a recent thread on DIYAudio was concerned with creating an open source PCB layout for the LM3886. Although initiated and largely designed by user 00940, there has been some input from others, including advice from Tom Christiansen of Neurochrome, resulting in what should be a good implementation. Gerber files, the set of files necessary for a PCB lab to manufacture your project are freely available for use and modification here. It cost me less than £6 to get ten amp boards made.

The power supply comes courtesy of Brian Bell, former owner of Chipamp.com. After relinquishing control of this small company to another individual, the company appeared to go downhill, but after its demise, Brian generously released the designs he created, including this power supply, into the public domain. If board dimensions are kept below 100mm X 100mm, the cost of manufacture and postage is negligible, again coming in at less than £6. Gerber files can be found here.

Power supply requirements were calculated using the excellent guide on the Circuitbasics website. I’m aiming for 30W per channel into 8Ω speakers and therefore my transformer needs to be ±18V secondaries with a minimum 100VA rating. I ended up with 160VA as these were £10 cheaper than 120VA from the same manufacturer.

Construction is relatively straightforward for the PSU boards, but there are a couple of things to take note of. The mounting of connectors under the board puts wires very close to the snipped leads of the diodes. R3 is soldered to the underside of the PCB. The boards measured the expected +/-27V. The anode of the LED goes in the circular, not the square pad.

For the amplifier board there are a couple of noticeable things to consider with this build. First is the inclusion of an SMD resistor……I didn’t realise this when I ordered the boards. I needed to look up how to solder these components, but it wasn’t difficult. The second is the placement of the inductor. On the first board, I mounted the resistor R10 without thinking of placement of the inductor. For the second board I placed the resistor inside the coil. I stayed with the BOM created by 00940 for the boards and so they are stuffed with good quality parts, Vishay, Nichicon, TDK, Kemet, Wima and so on.

There are two so called optional stability components to the standard example layout. The Thiel network utilises a 10R resistor in parallel with an 0.7uH inductor. The inductor is formed by by wrapping enamel coated wire) around a cylindrical former, such as a pen. To calculate the number of turns and length required, I used a calculator from this website.

For testing, the amp boards need to be fastened to the heatsink for thermal cooling. I also placed a couple of 2W resistors in series with the power leads from the PSU to the amps. Cheap speakers are a must, just in case there is a problem. Fortunately everything worked fine at the first attempt.

Once tested, the process of assembly into a HiFi2000 Pesante enclosure begins. I use the optional base plate as there is too much weight for the standard base. You may notice a couple of extra switches in this build. Originally I had intended to incorporate a PiZero DAC and streamer but I had noise problems I couldn’t solve. The two power switches were to allow independent shut down of the amp PSUs and the Pi transformer. The switch next to the RCA inputs is a selector, to allow the use of either external sources or a direct feed from the internal DAC.

To eliminate or reduce noise as much as possible I paid particular attention to good practice for grounding and layout. I’ve no doubt it could be better, but as it stands, the amp to my ears is near silent when no music is playing. I kept good separation between power supply elements and the amps and associated signal wiring. I jumpered the grounds on the individual PSU boards and combined these with the grounds from the amps into a star ground comprised of a Wago 221 connector. One wire exits this star to connect to the ground lift circuit (detailed in this build) before continuing to the chassis safety ground. As detailed by others, there should be only one connection to the chassis. You may also note that I removed the anodising around the screw/bolt holes of the chassis to facilitate continuity.

I tested the completed amp with Wharfedale 220 speakers and a Chromecast Audio source, as this is what the recipient will be using, and I’m very satisfied with it.

In terms of cost, the amplifier can be constructed in a number of ways depending on budget. I chose two transformers and PSUs because I wanted to try something different to the last chipamp I built.