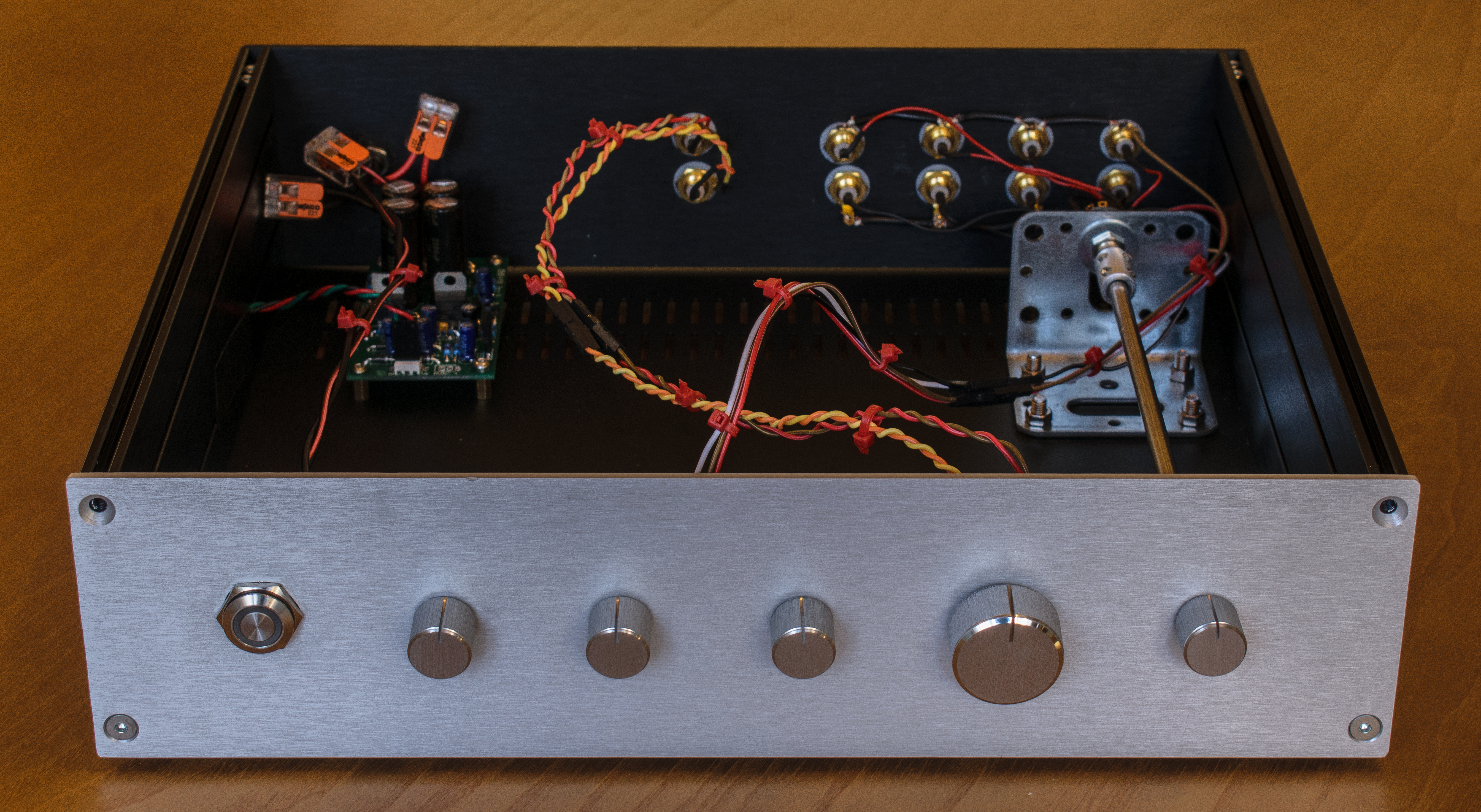 Following the completion of the PeeCeeBee power amplifier, I wanted to build a pre-amplifier to go with it. At present I’m using a Schiit Modi 2 & Magni 3 combo for DAC and preamp duties, and whilst these are perfectly adequate, I wanted a preamp to match the style of the PeeCeeBee. In contrast with conventional wisdom, I also wanted balance and tone controls. Whilst these have been out of favour for years, I find they have their use and will try to explain my reasoning.

Audio reproduction through HiFi equipment is always a compromise; but I believe the electronic (active) side of things is largely taken care of by most decent, modern equipment. Reviews and measurements by bloggers such as Archimago and Amir at Audio Science Review seem to bear this out; low THD+N, low jitter, low noise floors, decent power supplies are all well within the realm of affordability. Although the audiophile mantra is one of unadulterated music, this ideal is more complicated than ensuring the signal is reproduced accurately through an amplifier. As good as the active side may be, the factors governing the final sound you hear will most likely be as a result of the passive factors – loudspeakers and the room they are used in, rather than the electronics. That said, I think the goal must be to reproduce the music in such a way that it pleases the individual listener. That may come from achieving a realistic representation of the sound of music in a concert hall, or something else, it matters not.

Listening at low volumes can be improved by an increase in the lower, bass frequencies (hence the ‘loudness’ button on some integrated amplifiers). Sometimes I have to tone down the frequencies in the 1-2 kHz range on some recordings, especially those with violins or pianos. This is true for me across many setups of the active and passive elements of reproduction. The nature and/or quality of the recordings will also have some bearing on the issue. For example, I don’t feel the need to reduce the levels on classical recordings from the ECM label, of which I have a number of, but the ‘house sound’ is certainly not to everybody’s taste. For a good discussion on tone control with useful analogies to image processing, see the musings of Alan Shaw from Harbeth Audio here. To conclude on this theme, whilst I can, and do occasionally use the DSP capabilities of JRiver when I play music through the computer in my office, sometimes I stream through the Pi, and here a quick alteration of tone or balance would be convenient and sufficient.

Having decided that I wanted a pre-amplifier with tone and balance controls, I began the search for a suitable project. Rod Elliott’s audio designs are often well regarded so I looked through his list of projects at Elliott Sound Projects (ESP). If you have not come across this site yet, I would urge you to take a look. It’s probably the most comprehensive DIY audio website around in terms of articles and projects. Projects can be built using his schematics and notes, or you can purchase his PCBs which also gives access to the secure part of the website with more information and detailed construction advice. The sale of PCBs funds the free site and it’s worth buying a project or two to support this invaluable resource.

Rod offers two preamplifiers with PCBs, the P88 and P97. Whilst the P88 is very popular, I went for the P97 for the on board tone, balance and volume. Rather than the normal tone bypass, this board ‘desensitises’ the tone controls if required, using a switch to swap between different amounts of boost and cut. Particular to ESP designs, the pots are linear and use circuitry to gain a logarithmic response. The rationale for this is outlined in another of Rod’s projects here. Three op-amps are used in this circuit and can be NE5532 or many others. I chose the OPA2134 as I had some of these already and they are a good performer yet stable. Gain of the output stage is 2.2 (6.8dB) if built using the recommended resistor values of 33KΩ for R113/213, but this is configurable. After trying the standard gain with the preamp being fed by a Schiit Modi 2 DAC, I found this too much. I only had a very narrow range of volume adjutment when playing through my PeeCeeBee. I swapped the 33KΩ for 15KΩ resistors to achieve unity gain and this worked much better for my setup.

I also purchased a P05D preamplifier power supply. This is quite a versatile project in that it can take its supply from either a traditional split voltage transformer or an AC wall pack adaptor and can be configured for any voltage from ±2.5V up to ±25V. An auxiliary supply is also provided on the board, complete with a ‘loss of AC’ detector for the muting circuit. I chose to try the wall pack method and sourced a good quality 16VAC adaptor from Amazon.

Construction for both boards is straightforward, with easy to obtain components and thorough instructions. I am sceptical about the benefits from using so called ‘audiophile grade’ components but I do use good quality parts. Resistors are standard metal film 1% tolerance. Film capacitors are Wima and polarised capacitors are Panasonic. All are purchased from reputable suppliers as always due to the proliferation of fakes from the usual auction sites.

Once built, both the PSU and the preamp were tested. For the PSU, a 22 Ohm wire wound ‘safety’ resistor is placed in series with the AC to the supply. Voltage is then checked at the supply outlet, and this board came up nicely to within a couple of millivolts of +-15V. The preamp then had 100 Ohm safety resistors placed in series with the supply leads and again the voltage was found to be within millivolts of 15V. The next stage always brings with it the most trepidation – the full connection and test. I wired up a DAC to the input and connected the output to my ACA amp. Everything worked perfectly, all the tone functions, balance and volume seemed fine.

Originally I had thought to use the Pesante enclosure with a 10mm front panel from HiFi2000 to match the PeeCeeBee. However, the amount of machining required (holes and rebates for the controls, power switch etc.) pushed the price up too much. Instead, I opted for the Galaxy with a 3mm panel which meant I could drill the panel myself. My 16mm drill bit, with help from me, made a bit of a mess of the hole for the power switch on the front panel.

As well as the front panel controls directly connected to the PCB, I decided to mount a source selector switch. The switch itself is mounted to the rear of the enclosure to minimise long input wire lengths. HiFi Collective sell a mounting kit which includes a bracket, but I think it’s too expensive for what it is. Instead, I found an angle bracket designed for timber on Ebay for under £2. These come in a variety of sizes and have a number of mounting holes and a couple of slots to position the switch height. The switch is then connected to a piece of 6mm steel rod by a small shaft coupler and then exits the front panel. The rod and coupler were both reasonably priced from HiFi Collective and were cheaper than I could source elsewhere.

After all the drilling was completed and I started assembling the preamp, I realised I’d made a mistake in that I hadn’t taken into account the layout of the PCB. Rod has laid it out sensibly so the power connector is away from the signal connector, yet I had positioned the PSU and selector switch on the opposite sides. It was too late to change because of the drilling of the front panel, so another lesson learnt. Still, after another trial connection to my ACA, there was no noise audible whatsoever.