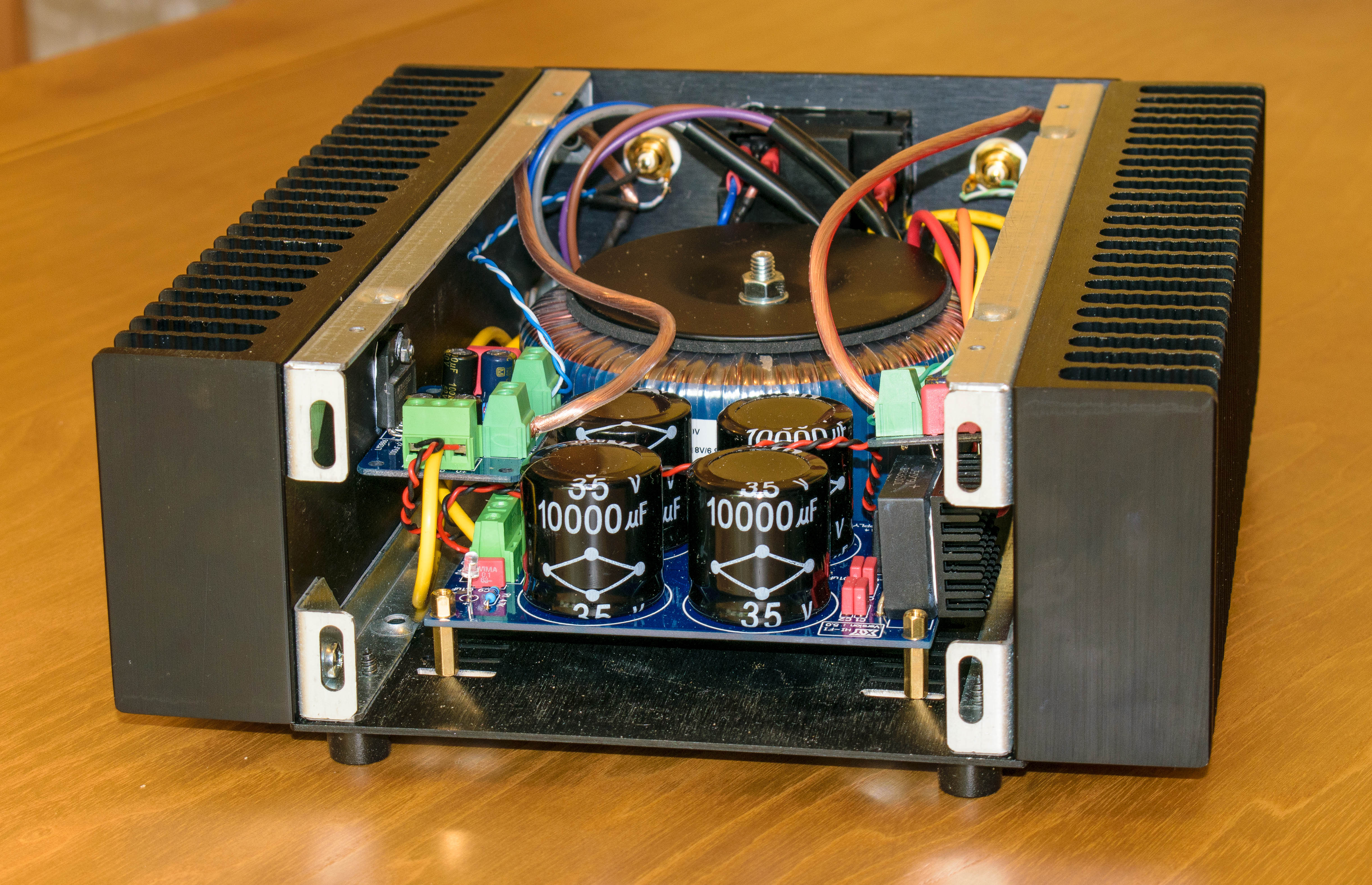 What does a $3300 amplifier sound like? I suppose I’ll find out soon when I finish building a Gainclone amplifier. A Gainclone, as its name suggests, is a clone of an amplifier which first appeared in 1999, the Gaincard built by 47Labs. Heralded for its sound by Stereophile magazine, people were nonetheless surprised to discover the part cost was estimated to be in the region of $100. Characterised by a simple circuit with short signal paths and minimal components, it relied upon an Integrated Circuit (IC) for amplification, costing about $5.

DIY enthusiasts took to in their droves and many iterations have since appeared using a variety of ICs and circuit designs, with many at DIYAudio praising the research undertaken by Tom Christianson, culminating with his LM3886 Done Right.

Perhaps the place to start if you are completely new to this form of amplifier is with the Gainclone FAQ webpages. The variety of amplifiers and divergence from the original design has resulted in the more generic term of ‘chip amp’ being used. A browse around the chipamp subforum of DIYAudio will enable the newcomer to familiarise themselves with the designs and chips available today.

For this project I chose the Texas Instruments LM3886 IC as the base as it is well-regarded, capable of 38W per channel into 8Ω with very low distortion and is still in production. For a complete run through of a design and build using this IC, including the rationale for component values, have a look at this page from Circuit Basics. I found quite a few kits for sale from Ebay and other places but research suggests that many of the parts, including the IC, are likely to be fakes. To this end I decided to purchase bare PCBs and source the parts myself from my usual suppliers (CPC and RS). The PCB design I chose is the popular XY variant and I bought a set which included a PSU PCB from Ebay. The XY board has some omissions regarded as essential by some enthusiasts, but these can be added and I describe those additions later.

The LM3886 chip comes in two variants, isolated and non-isolated. I bought the isolated chip which means it can be bolted directly to a chassis heat sink. The non isolated version allows for better heat dissipation but needs to be electrically isolated from the chassis by some other method.

Most of the components were easily sourced from CPC, but identifying the bridge rectifier was more difficult. I resorted to scouring the internet for images with a part number on and eventually found a nice build which not only included the necessary information, but gave me a lot of help for my build. The part is a BR3510L and not readily available from what I could see, but I did find a seller on Ebay who had a few.

The PCB build is relatively straightforward. Note on the amplifier PCB the jumper next to the resistors. A resistor is only required if the boards are run in parallel. I noted on another site the use of small film bypass capacitors to shunt any AC signals (which manifest as noise which will be amplified) to ground. I took the values stated on that site (0.1 μF) and used them in my build as the other capacitors were the same.

The datasheet for the LM3886 uses 28 -0-28V supply to the chip and this is what people tend to aim for, so I stuck to that value. However, after reading the warning from the decdun.co.uk website about fluctuating mains voltage, I decided to err on the side of caution and drop the voltage a little. I purchased a Noratel 250VA 18-0-18 toroidal transformer from CPC to give 27V at the PSU. It is also recommended that an inrush suppressor is fitted if the transformer is larger than 160VA. This is because a large amount of current is initially pulled at startup and this can cause the switch to fail. The suppressor (in this case a 10Ω thermistor) presents a load when the amp is switched on, but the resistance gradually reduces as the amp warms up with use. This aspect of the build – dealing with mains voltage was slightly worrying for me. I read and re-read the decdun pages about the construction of power supplies, connections and earthing until I felt comfortable that I understood what I was doing.

The first test of the power supply blew the fuse in the IEC socket. I couldn’t see a problem with any of the soldering and I checked all of the components for ratings and polarity where necessary but nothing seemed wrong, so I replaced the fuse (slow blow 1.6A) and tried again. This yielded the same result. After pondering the problem for a while I realised that I was shorting the PSU as I hadn’t lifted the PCB off the wooden block it was resting on. I fitted some spacers, replaced the fuse and this time it worked.

As mentioned earlier, the XY PCBs have some stability components missing. Although considered optional, most people seem to use one or both in their builds and the Neurochrome website documents their usage in detail. I fitted a Thiel network which helps to reduces oscillations from capacitive loads rather than the inductive loads dealt with by the zoble network. This requires a resistor in parallel with an inductor, often located by the speaker terminals. I used a 10Ω 3W wire wound resistor and made the inductor from enamelled wire. The datasheet recommends 0.7μH and this website calculator shows how many turns you need for a given wire diameter.

The next part of the build, assembly into a chassis is, for me, the hardest part of these types of projects. I knew I wanted a relatively small form factor for the enclosure, and I was impressed with the quality of the chassis that came with the Amp Camp amp, so I had a look at the supplier the DIYAudio store used. I chose the same type of chassis, but needed more length to accommodate the transformer and PSU. There are options to have the panels cut to accept all of the connectors but I needed to have the enclosure in front of me to visualise where they were to go. I think next time I might construct a cardboard version first and then send the cutout details to the manufacturer to be machined neatly. There are also options for lettering and graphics but these, on top of the machining, can add up to a considerable amount.

There is an element of compromise when you are dealing with a compact build. To begin, I physically lay out the connectors on to the chassis panel. I placed the PSU, transformer and amp modules on the base plate and determined how much space I would have at the rear panel. This showed me I needed the IEC socket high up and so I decided to place all of the speaker outputs in a line below with the RCA sockets either side of the switch. I lay the components out on the rear panel in their approximate positions and then take some measurements to try to ensure symmetrical spacings. I do this on a full-scale drawing of the panel.

Once I’m happy I proceed to make a mess of the drilling and cutout. For the IEC switch cutout I used a 6mm drill in each corner of the rectangle to allow the jig-saw to be inserted. I then drilled a hole to accept a bolt which will be used as the star ground. I also sanded the area around the bolt to remove the anodizing and allow a good earth contact to be made. Between the nut and the panel I used a star washer to bite into the metal and further ensure good contact. For information on earthing and grounds I found this website invaluable.

The PSU PCB standoffs aligned nicely with the vents and I just had to widen them slightly with a small file to accept an  M3 bolt. With hindsight it might have been better to order the optional mounting plate.

I find it helpful to have a drawing of the internal wiring to refer to when it comes to the final case assembly. The image below shows my layout with the star ground. 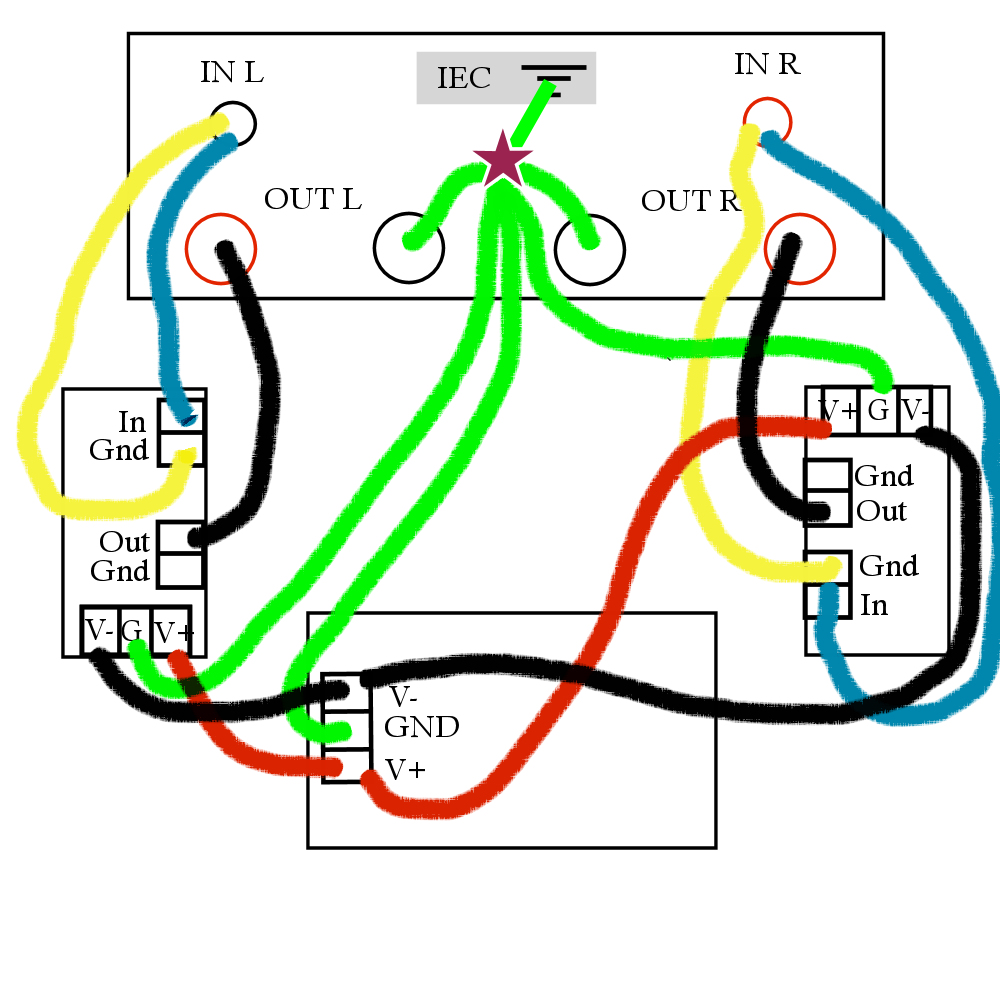 All connections to the star ground are made with 16 AWG wire which then connects to the earth terminal of the IEC socket.

Once the amplifiers are connected and the final wiring is complete the DC offset needs to be checked. The website Audiokarma gives comprehensive instructions. This amplifier measured extremely well at 0.5mV.

Before assembling the rest of the chassis, it was time to test with some music. I attached an old set of throwaway speakers which I keep for this purpose in case there is a problem. There was a bit of distortion but I wasn’t sure if that was because of the open case and testing it near a lot of EMI sources. I tried it on my Wharfedale desktop speakers and the sound was good but still noticed some distortion. The image above shows the inputs close to the transformer, this isn’t ideal so I routed these wires further away from the transformer and managed to get the buzz down to a minimum – barely audible with my ear next to the speaker.

Finally it was just a matter of assembling the rest of the chassis and having a proper listen. I went through a variety of music I’ve listened to a lot and enjoy the sound of on my standard system; Elgar’s cello concerto played by Sol Gabetta, Blue Maqams by Anouar Brahem, Battle by Dreadzone and some classical guitar pieces. I fed the amp from my phone and the Dragonfly DAC and all of the music sounded excellent to me. I’ll be doing some extended listening in the next few days and then start planning the next build which is likely to be some speakers.

The total cost for this project worked out at £211. This excludes wire and a couple of low-cost components that I had in stock, but does include all shipping costs and VAT. 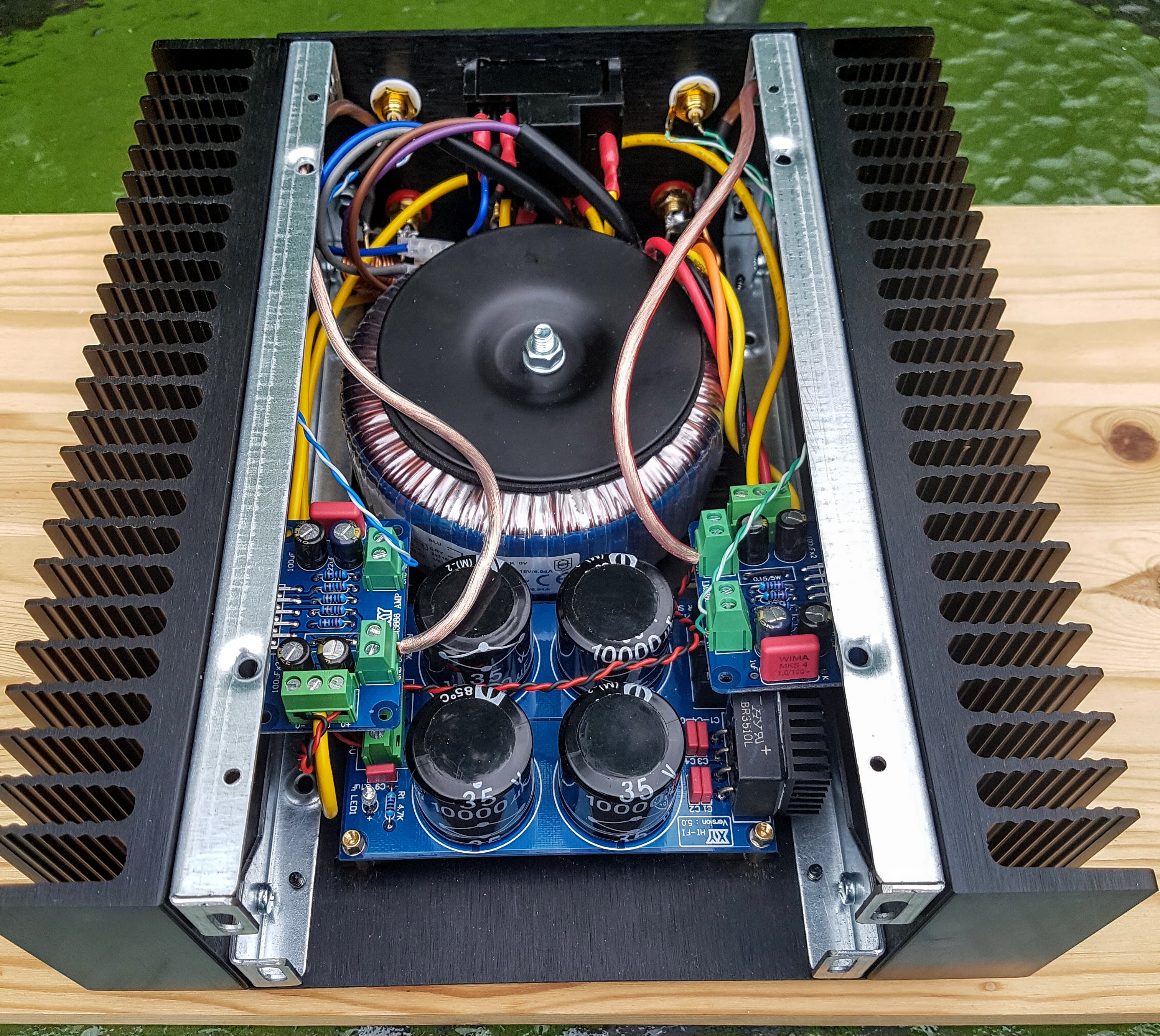 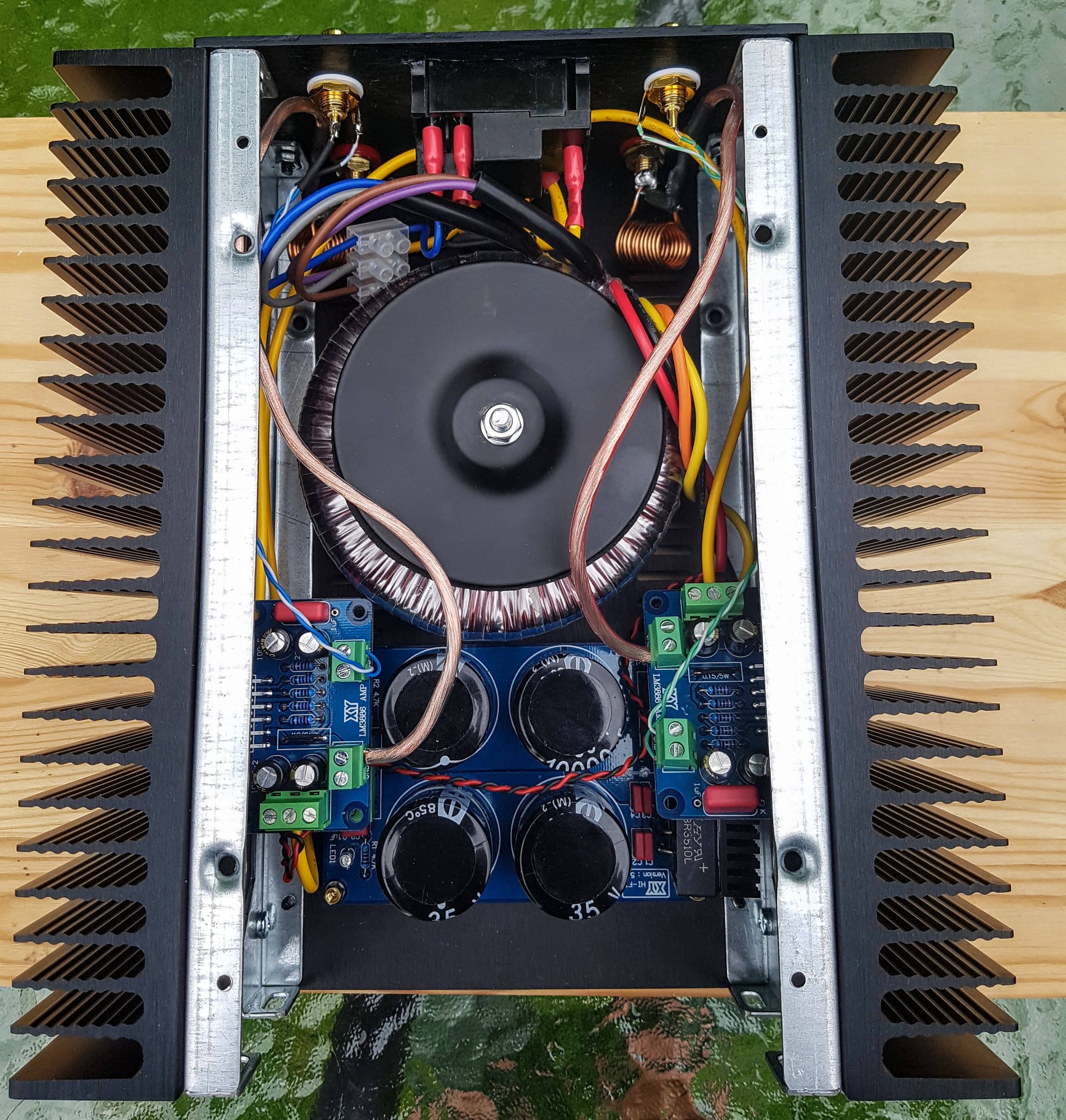 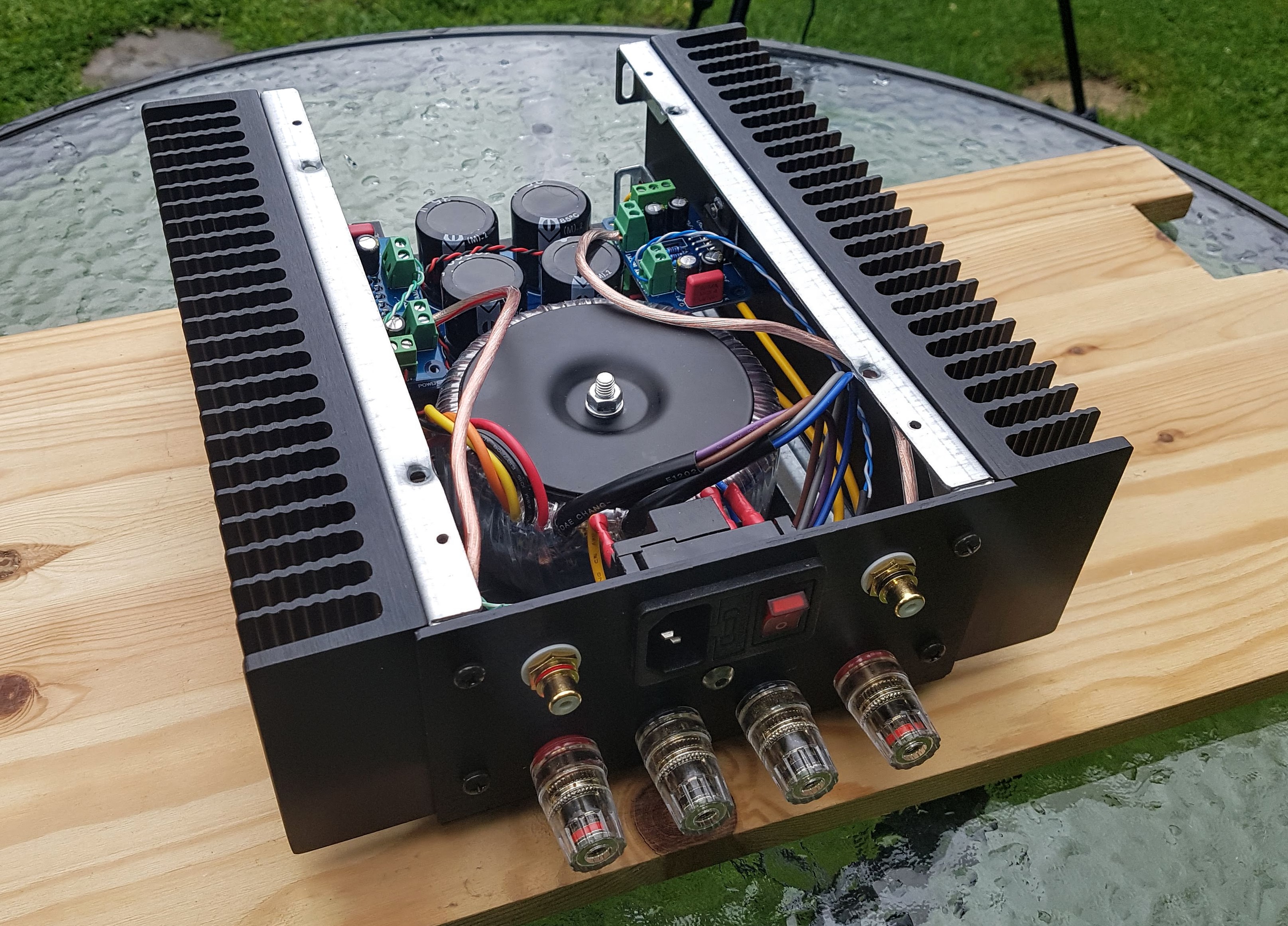 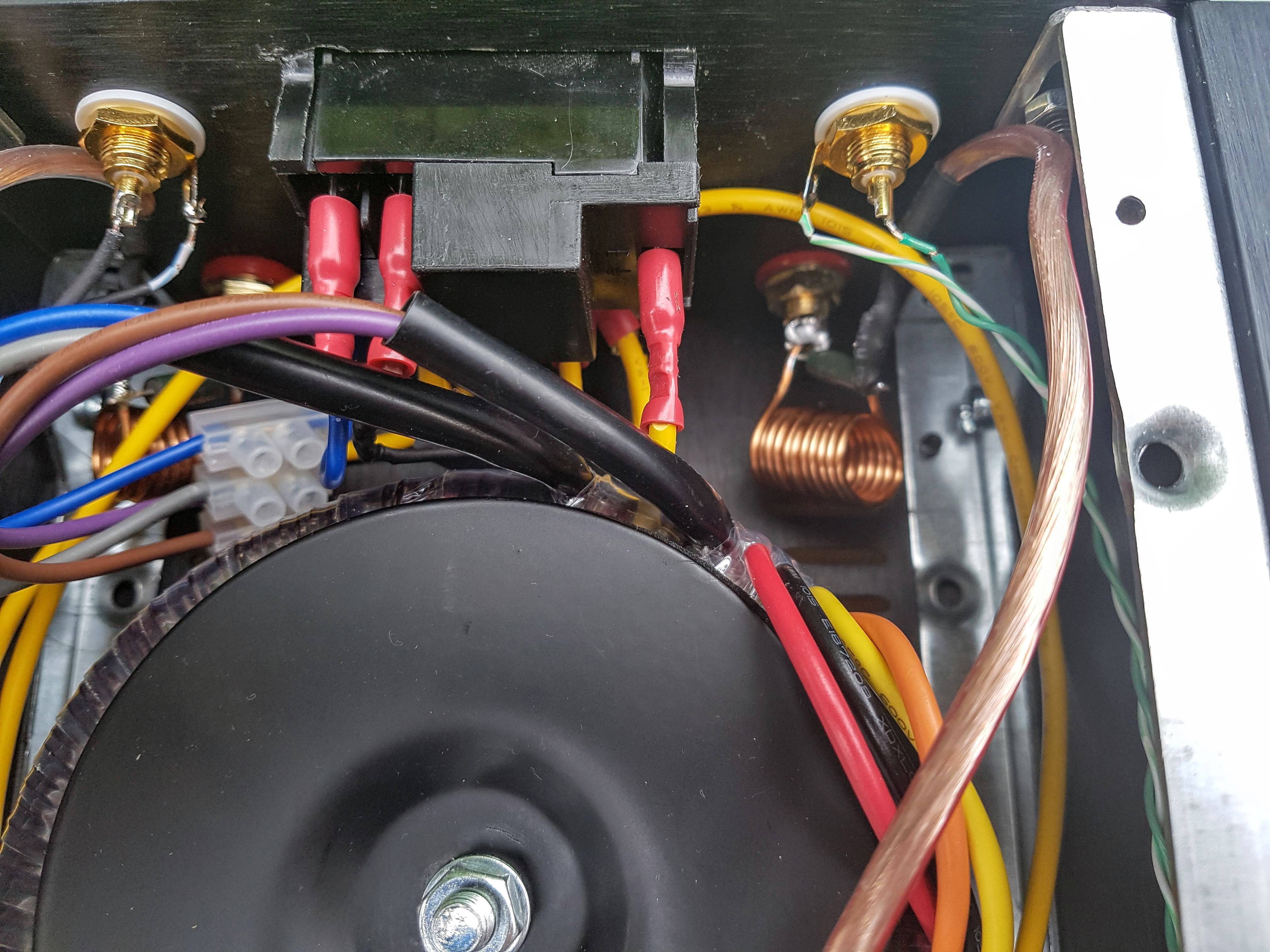 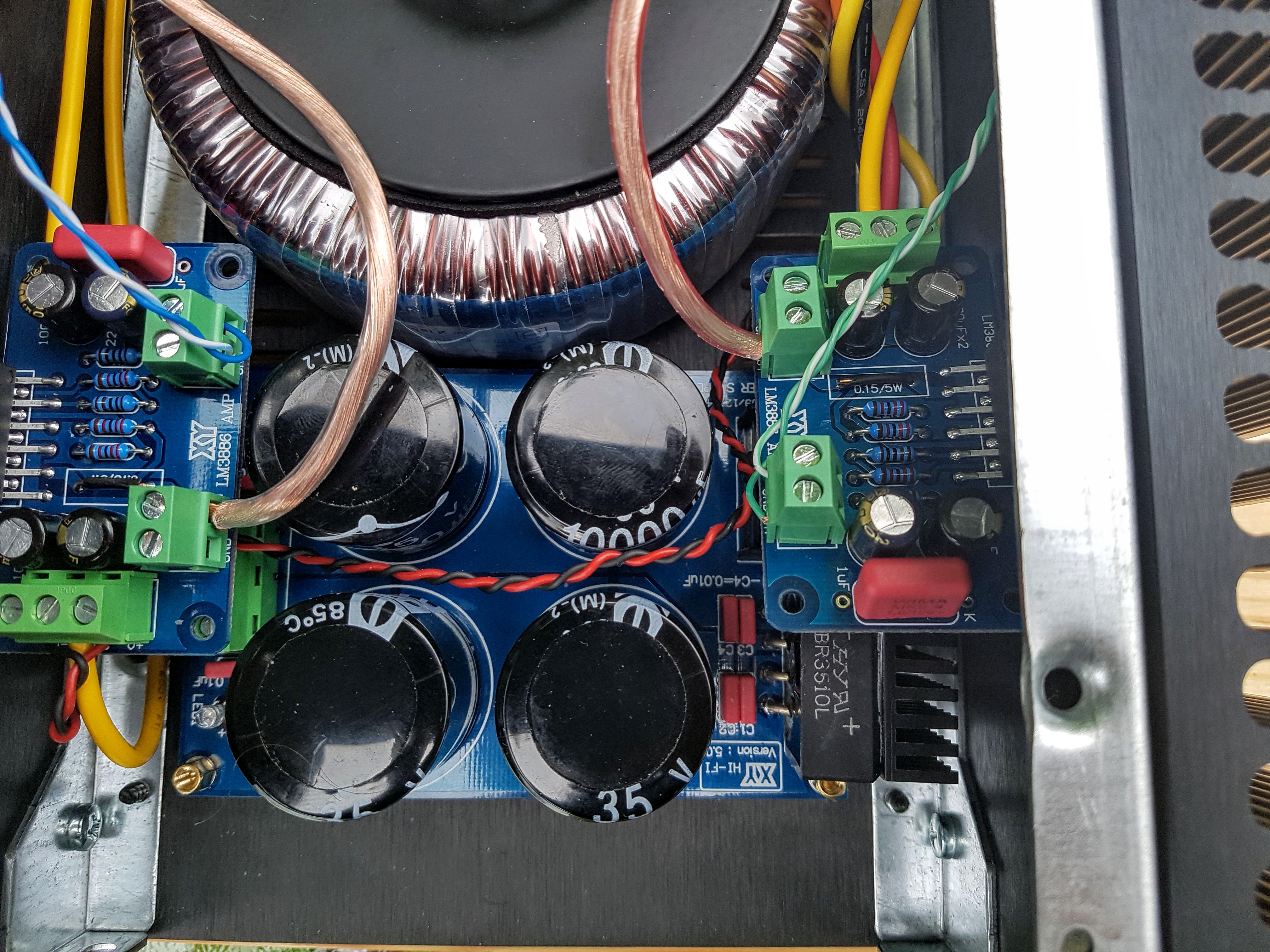 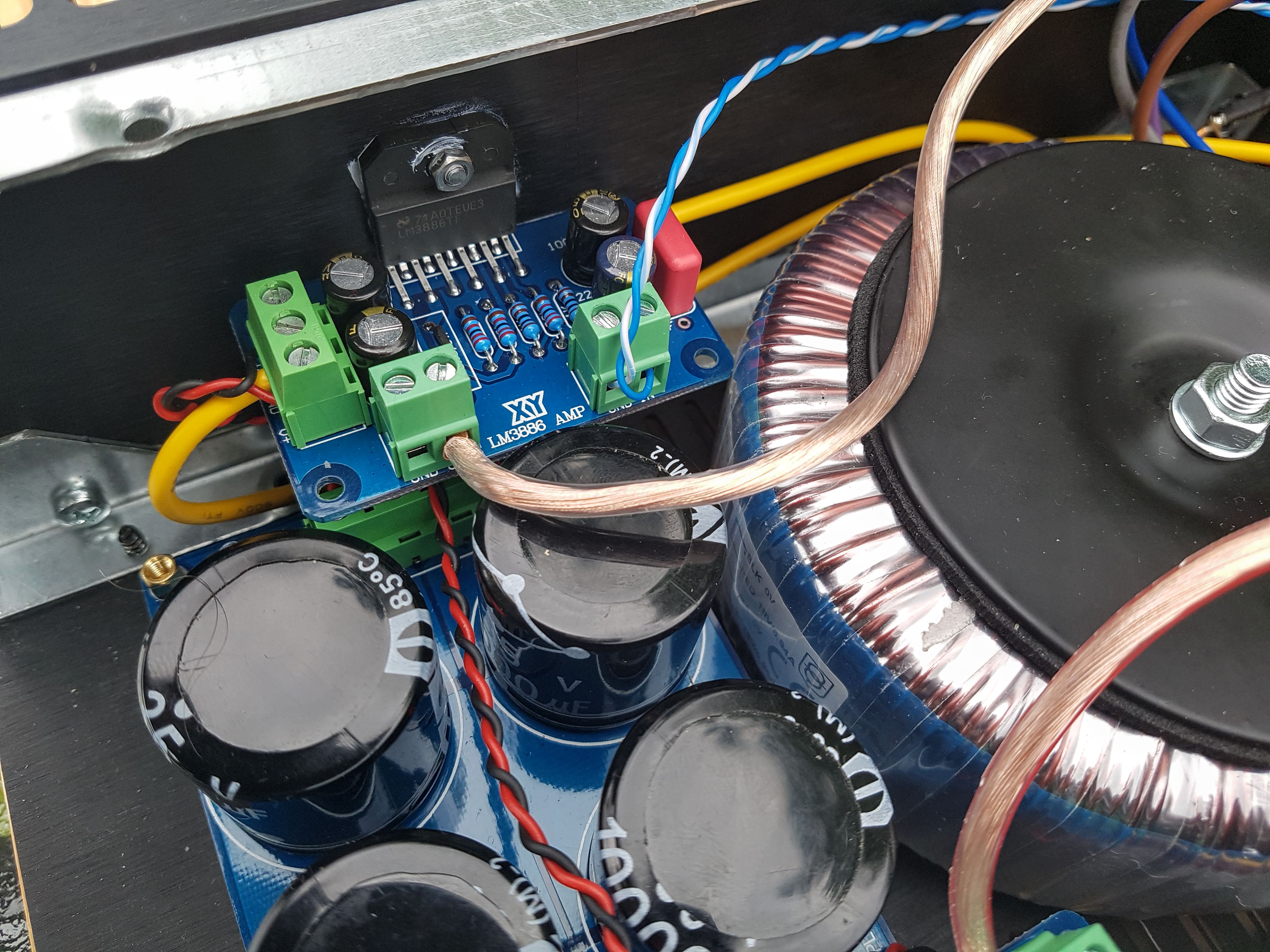 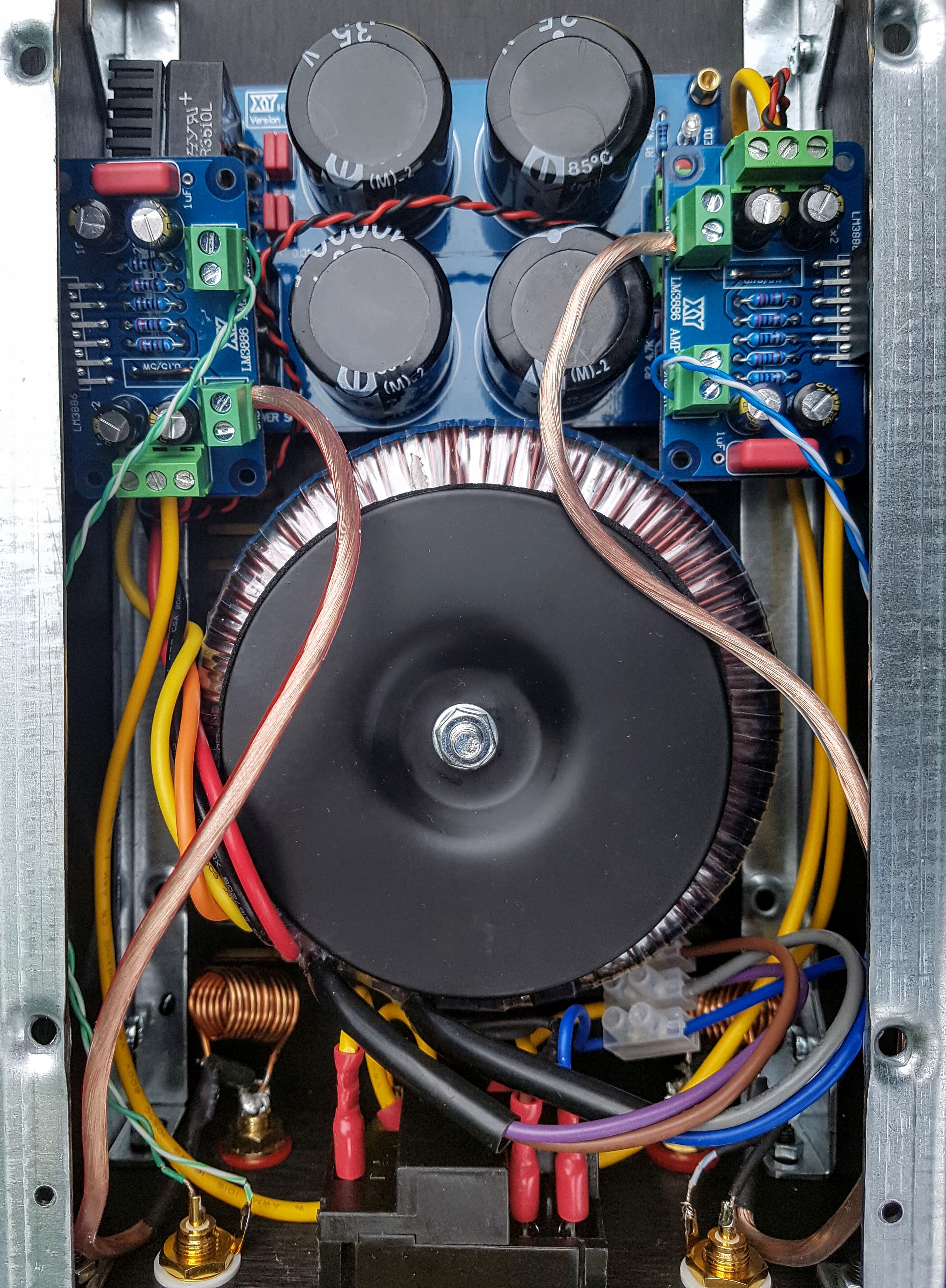 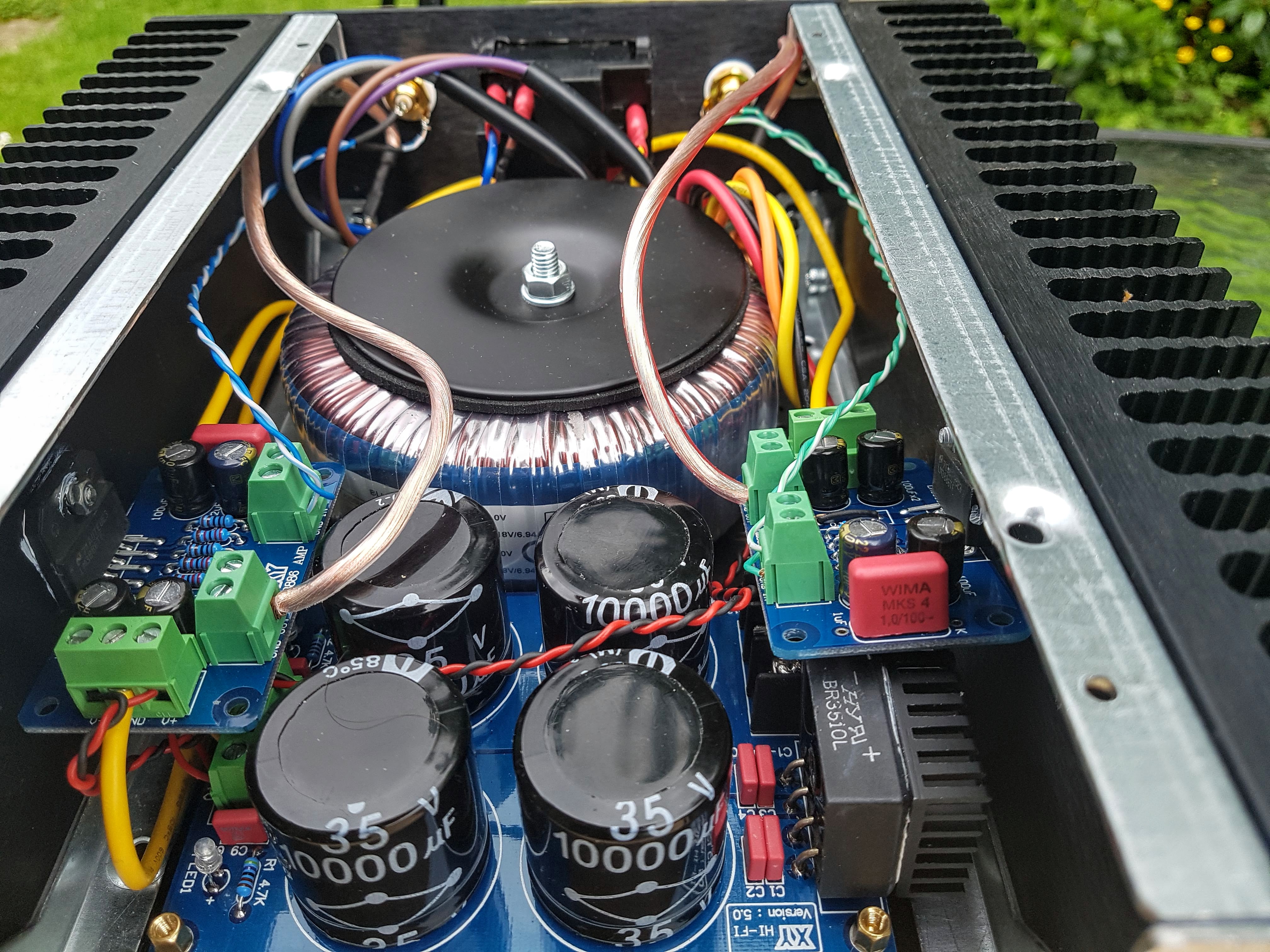 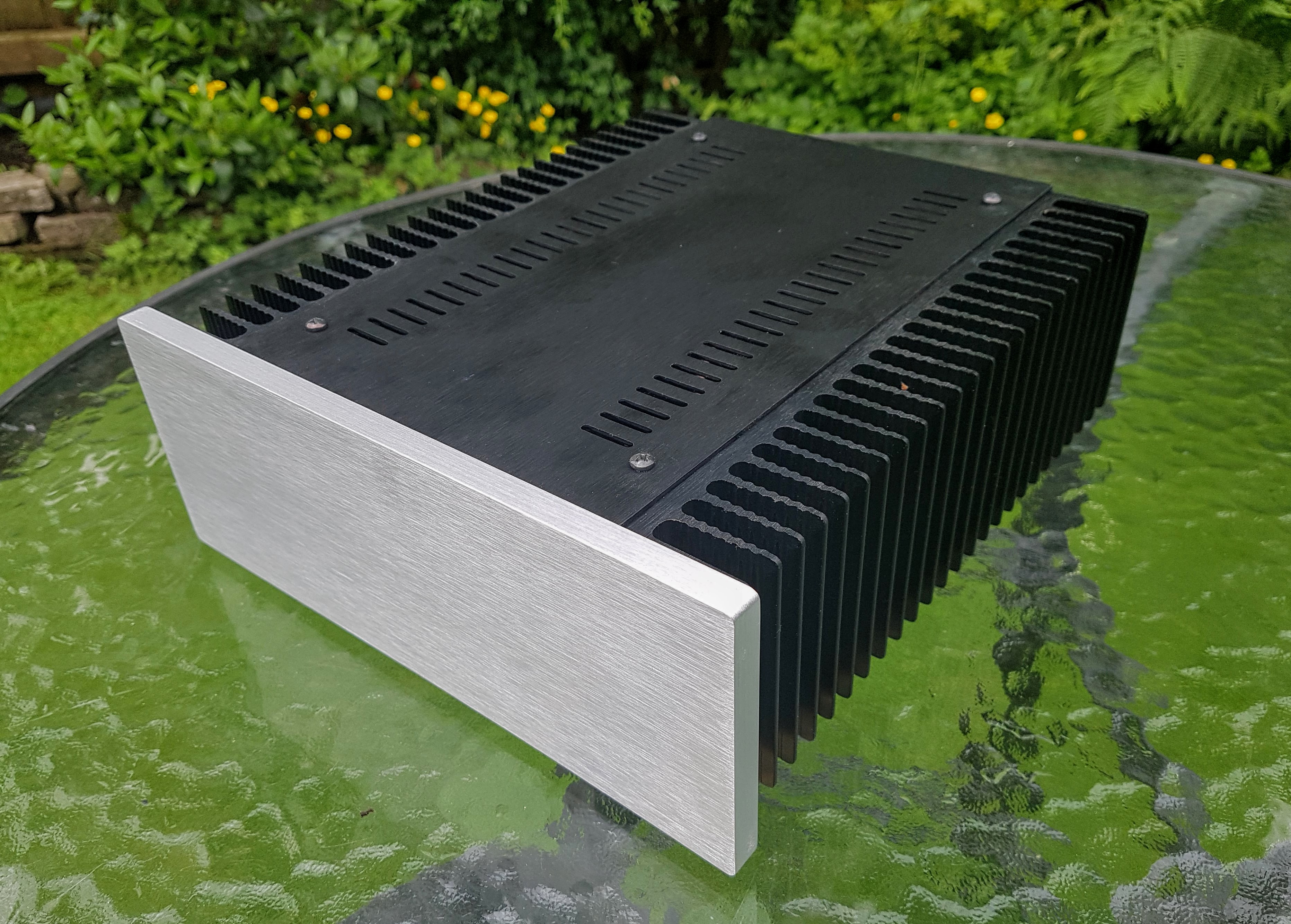 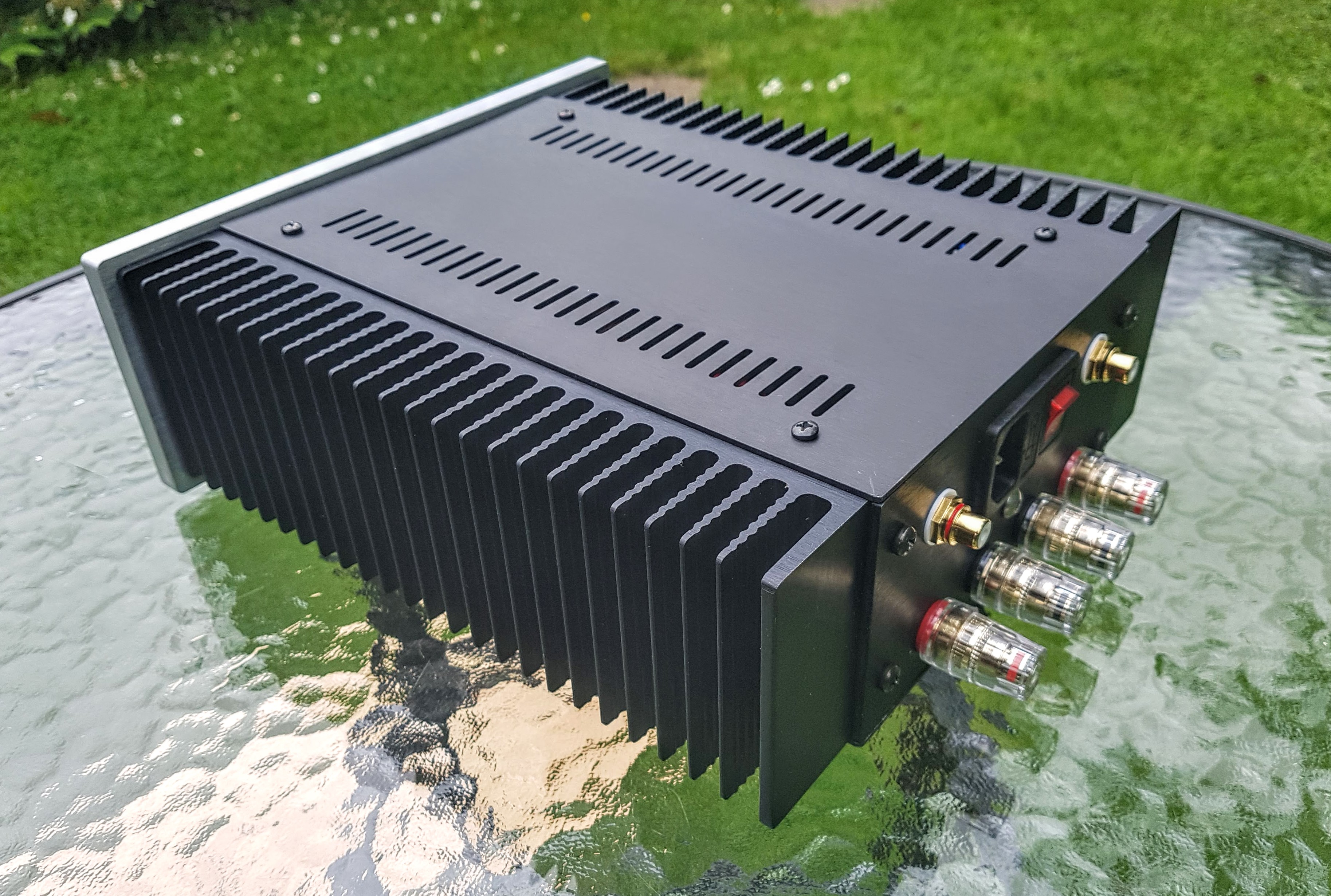 12 thoughts on “Attack of the Clones”