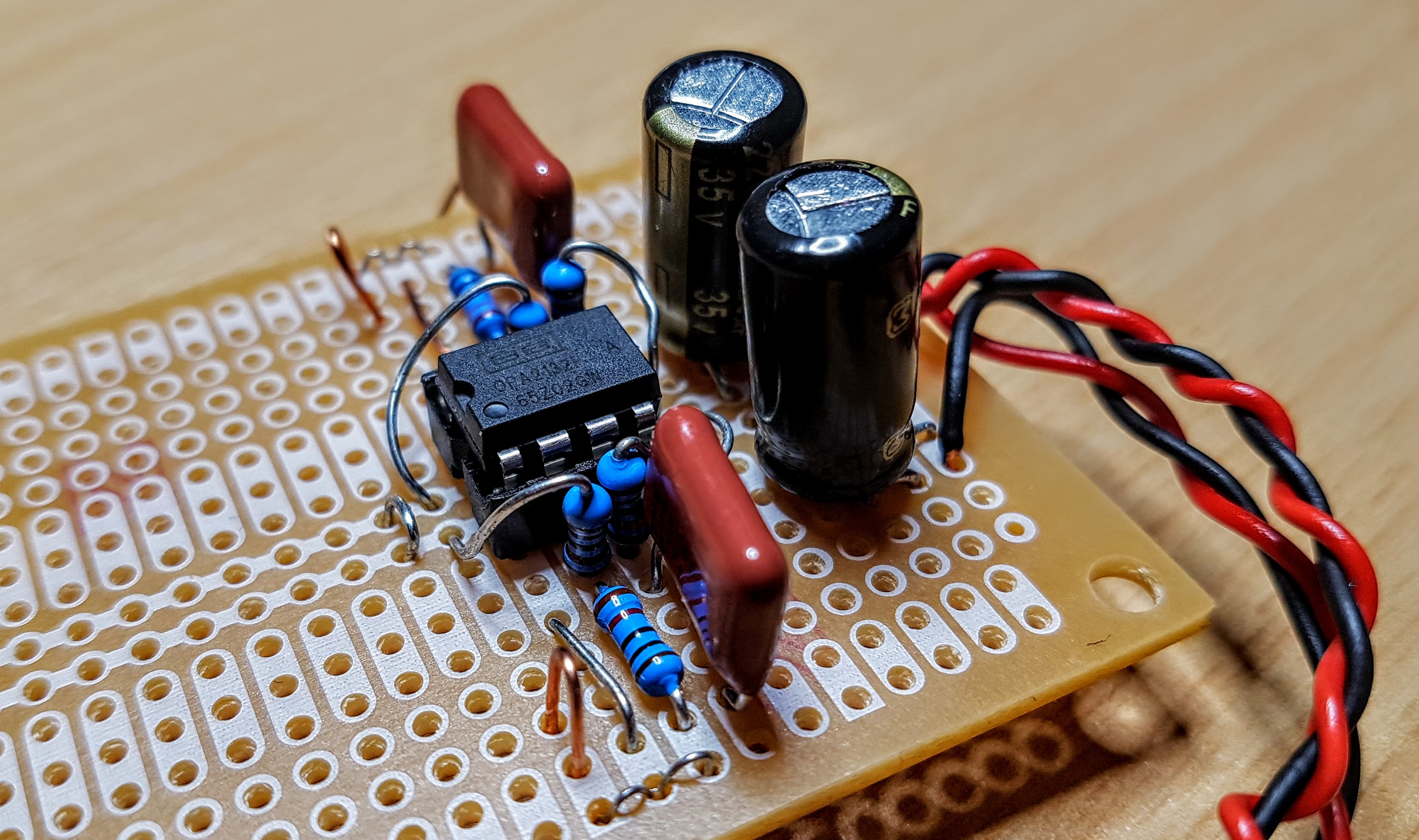 After assembling a couple of kit amps with differing results I decided to have a go at a ‘proper’ DIY amp, built from scratch on a prototype board.

Searching results in the suggestion that the CMoy amplifier is probably the ideal starter project. Whilst there are many resources to help you build this kit, I would highly recommend heading over to the Tangentsoft website. This site provides a gentle introduction to DIY audio and a very good walkthrough of the build. In addition there are suggestions for alternative choices, background reading and troubleshooting. I won’t delve any deeper into the particulars of the amp, they’re covered in detail at Tangentsoft. In this post I’ll just describe my build, especially the problems that I had. I will say that the first time I tested the amp I got decent sound, that is testament to the design and the excellent guide I used.

As an aside, this amp design relies on a ‘virtual ground‘. I first came across this when I built a kit amp and had problems, as described in this post. Building this amp has helped me get to grips with this concept, as well as reading about it in Practical Electronics for Inventors, a very good book to read alongside your practical projects.

As I’m in the UK, I used CPC-Farnell and RS Components for components. I would say that RS is probably the better site for me, I find it easier to use and Tangent gives RS part numbers making it easy to get what you need. In addition, RS has free next day postage with no minimum order whilst CPC require a £5 minimum spend.

I tried to make sense of the schematic as much as possible whilst building this amp, flicking between the schematic, the annotated photos and the graphic layout. I didn’t rush but still made a few mistakes along the way. The first was with the polarity of the capacitors, I placed one the wrong way round as I hadn’t noticed they are opposed.

I followed Tangent’s build guide even though it deviates from what appears to be standard practice when soldering components. Usually, all of the lower components – that is, those components that sit closest to the board – are soldered first and then you go to the next lowest, and so on. Because this is such a tight build you have to think carefully about placement, and putting the capacitors in first allows the resistors to be shaped around the caps. Before the capacitors went in, I soldered all the jumpers. The ‘m’ jumpers were a bit of a pain, make sure to use thin wire!

After desoldering the capacitor on the right and placing it in the correct way, I placed the resistors, the power wires and soldered the LED resistor in line with one of the power leads, covering it with heat-shrink. Tangent recommends checking the power supply works so I hooked it up to my bench supply at 9V and switched it on. The LED lit up and no smoke filled the room so that is to be considered a success.

After the power supply comes the amplifier section. I used a DIL socket for the opamp chip and this went in first, this was so that the resitors could be bent around the socket. The capacitors come next and this was one of my problems. When I ordered the capacitors the exact ones were discontinued and I just went with the recommended alternative as provided by CPC. The problem was that they were too long to fit the board so I bought replacements from RS as shown in the image. 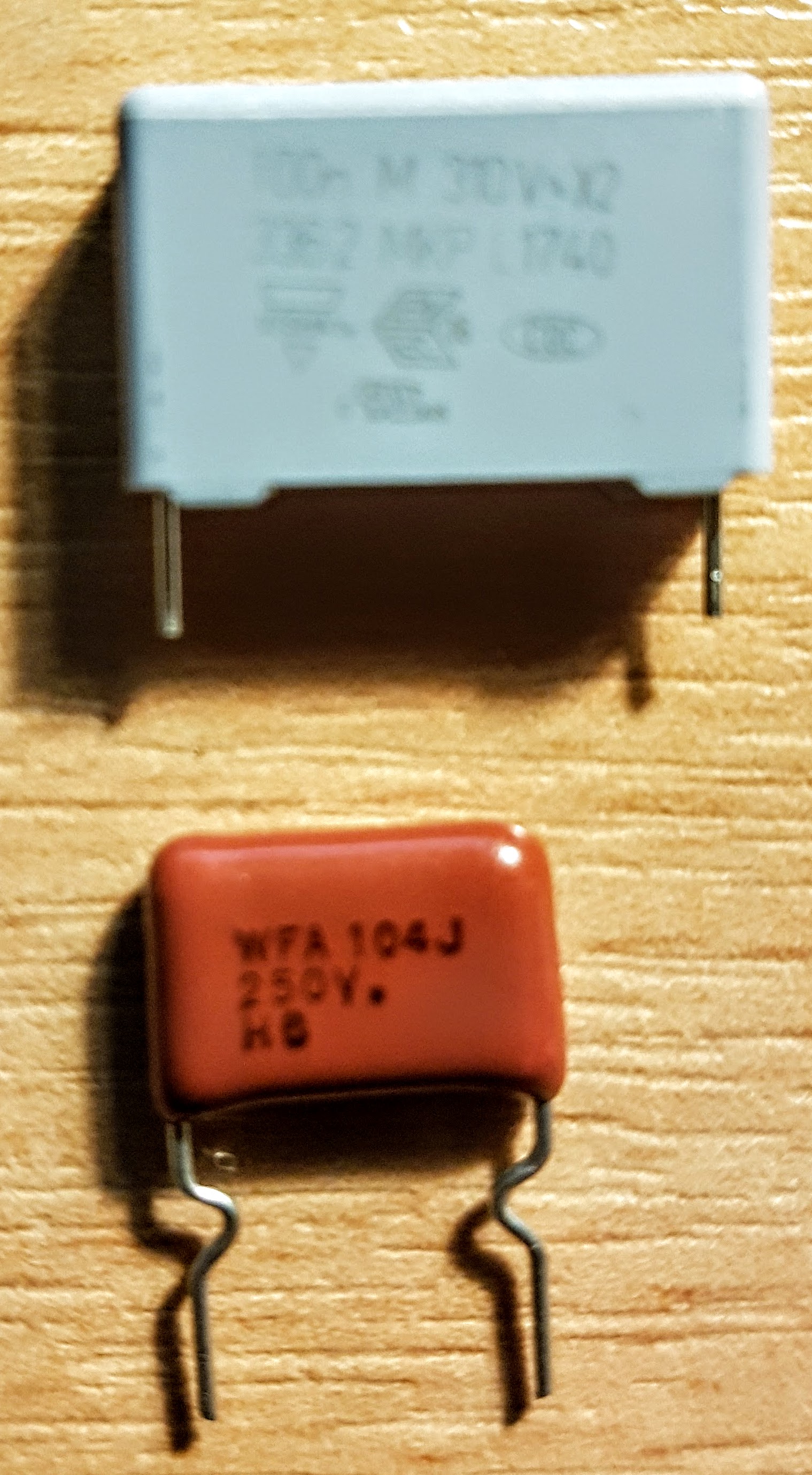 Once the caps arrived I soldered these, the test points and the jumper wires on the underside of the board. It was at this point that I noticed I’d placed the ‘m’ jumper on the right hand side of the board in the wrong place and so had to desolder and replace this in the correct position. Finally the op-amp chip goes into the socket after some gentle pressure on the pins to allow them to fit into the socket.

Power up again to test the circuit and make sure the chip doesn’t get hot. I’ve had a chip overheat on one of the kit amps and they really do get hot! The amp had no problems so on to the next stage, the audio test, a very nervous part as I’d spent quite a bit of time to get to this point. You attach test leads to the input, output and ground sections of the amplifier with these going via a 3.5mm audio cable to a music source (my phone in this case) and a cheap pair of headphones (so as not to damage your good headphones if there’s a problem). At first I just had a buzzing and noticed my lead placement was incorrect at one point. Once this was corrected the sound came out perfectly.

At this point I decided to call it a day before moving on to the case assembly. It’s always tempting to keep going until you finish but I didn’t want any more stupid mistakes and wanted to think about how I would place the panel jacks and volume control.

Whilst I was waiting for the replacement caps to arrive, I thought I’d try to get my head around the virtual ground and also make sense of the schematic. It’s easy enough to just follow Tangent’s layout and instructions, but part of what I’m trying to do is teach myself about electronics as they relate to audio and I think practical works aids theory. So, to this end I thought I’d try to use some parts to help me design a layout working from the schematic. I used a breadboard and utilised one of the buses as the common ground. The circuit worked but the sound was horrendously distorted. At least part of the problem came from the DIL socket which didn’t make a good connection with the breadboard. Swapping the socket for a better part improved, although there is still a slight hum. There may be other reasons for the distortion but I was happy enough that the circuit worked to some degree as it showed me I was beginning to understand circuits, schematics and layouts.

I finally found time to assemble the amp into an enclosure. I found this fairly challenging, particulalry trying to work out the wiring for the volume potentiometer. On the whole though it went quite well, if slowly, and it has given me valuable knowledge for the next build.

The final sound is still plagued by the hum and I think there is too much gain for the Sennheiser HD569s. I’m intending to build another one of these with lower gain, possibly a different enclosure and attempt to find the cause of the hum and address that.

This post was written to the classical guitar music of Zsófia Boros on ECM records.